COCKERHAM, a township and a parish in the district and county of Lancaster. The township lies on the Cocker rivulet, adjacent to the Lancaster canal, and the Lancaster and Preston railway, 2 miles SW of Bay Horse r. station, and 4½ NNW of Garstang; and has a post office under Garstang, Lancashire, and a fair on Easter Monday. Acres, 4,860. Real property, £8,078. Pop., 778. Houses, 131. The parish contains also the town ship of Ellel and part of the township of Thurnham. Acres, 10,480. Real property, with the rest of Thurnham, £20,561. Pop., 2,922. Houses, 530. The property is much subdivided. Thurnham is the seat of the Daltons. Some of the inhabitants are employed in cotton and silk mills. The living is a vicarage in the diocese. of Manchester. Value, £640.* Patrons, the Lords of the manor. The church is in the pointed style, and has a . spire. The p. curacies of Ellel, Shireshead, and Dolphinholme are separate benefices. There are three dissenting chapels and an endowed school.

Details about the census records, and indexes for Cockerham.

The Register Office covering the Cockerham area is Lancaster.

You can see pictures of Cockerham which are provided by:

"COCKERHAM, a parish and township in the hundred of Lonsdale South of the Sands, in the county of Lancaster, 5½ miles S. of Lancaster, and 1¼ W. from Bay Horse station. It is situated on the river Cocker, near the Preston canal and railway, and contains the districts of Shireshead, Ellel, and Dolphinholme, each of which have their own church and ecclesiastical establishments. The parish church, dedicated to St. Michael, is in the pointed style of architecture. The living is a vicarage in the diocese of Manchester, value £640, in the patronage of the lords of the manor. There is a parochial school for both sexes, with an endowment of £11 per annum; also a Sunday school. The population are principally employed in agriculture, but there are two cotton mills and one silk mill in the parish. At Cockerham Point and Plover Rock, near the entrance of the bay, are two fixed lights, which maybe seen at 9 miles distance, put up in 1847, to direct vessels entering the channel. At Thurnham is a fine old mansion, the seat of the Daltons. Thomas Green, R. A. Clarke, J. Villiers Dent, and the Rev. R. Atkinson are lords of the manor. A fair is held on the 24th March for horned cattle."

In 1835 the parish of Cockerham contained the townships of Cockerham, Ellel, Forton, Cleveley, and Winmarleigh

You can see the administrative areas in which Cockerham has been placed at times in the past. Select one to see a link to a map of that particular area. 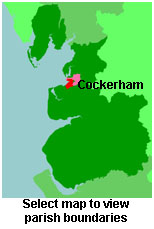 View maps of Cockerham and places within its boundaries.