COCKERSAND ABBEY, an extra-parochial tract in the district and county of Lancaster; at the mouth of the rivulet Cocker, 6¾ miles SSW of Lancaster. A Pre-monstratensian abbey, on the site of a previous hermitage and hospital, was founded here, in 1190, by Theobald, brother of Archbishop Hubert; was restored, for a short time, after the dissolution; and is now represented by its octagonal chapter-house, and part of the other walls. It belongs to the Daltons of Thurnham; and is sometimes called Thurnham-Abbey.

Details about the census records, and indexes for CockersandAbbey.

The Register Office covering the Cockersand Abbey area is Lancaster.

You can see pictures of Cockersand Abbey which are provided by:

"ABBEY FARM, an extra-parochial place, in the township of Thurnham, and hundred of Lonsdale, in the county palatine of Lancaster, 4 miles to the S.W. of Lancaster. It was the site of Cockerham abbey."

"COCKERSAND ABBEY, an extra-parochial place in the county of Lancaster, 6 miles S.W. of Lancaster. It was founded in 1190, and is in ruins, except the chapter house."

In 1835 Cockersand Abbey was a township in the parish of Cockerham.

You can see the administrative areas in which Cockersand Abbey has been placed at times in the past. Select one to see a link to a map of that particular area. 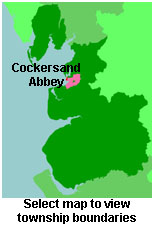 View maps of Cockersand Abbey and places within its boundaries.