"COLNE, a town, a township, three chapelries, and a sub-district in Whalley parish, Burnley district, Lancashire. The town stands on the river Henburn, and on the Lancashire and Yorkshire railway, near the Leeds and Liverpool canal, 2¼ miles SW of the boundary with Yorkshire, and 5½ NE of Burnley. It is thought by some to have been the Colunio of the Romans; but it has yielded no other evidence of Roman occupation than some Roman coins. It occupies a rising-ground; presents chiefly a modern and manufacturing aspect; and has a head post office, a r. station with telegraph, a banking-office, two chief inns, three churches, five dissenting chapels, a cemetery of 1860, a mechanics' institute, and two endowed schools. The chief of the churches, St. Bartholomew's, is perpendicular English, with some Norman traces; has two chantry chapels, a fine screen, and an old font; and was restored and enlarged in 1857. The two endowed schools have £15 or £48 from endowment; and one of them had as a pupil Archbishop Tillotson. A weekly market is held on Wednesday; and fairs on 7 March, 13 May, 11 Oct., and 21 Dec. Manufactures of woollen and worsted were formerly extensive; but manufactures of cotton are now the chief. Pop., 6,315. Houses, 1,357. The township comprises 4,575 acres. Real property, £20,817; of which £800 are in gas-works, and £120 in quarries. Pop., 7,906. Houses, 1, 701. The property is much subdivided. The manor belonged anciently to the Lacys; and Barnside was an old seat of the Townleys. The surface is hilly; the rocks include coal, limestone and slate; and a double-ditched camp, 360 feet by 330, is at Castor Cliff. The three chapelries are St. Bartholomew, Christ Church, and Barrowford; and the first is a rectory, the others p. curacies, in the diocese of Manchester. Value of St. Bartholomew, £300;* of Christ-Church, £150;* of Barrowford, £150. Patrons of all, Hulme's Trustees. The sub-district contains six townships. Acres, 15,435. Pop., 21,203. Houses, 4,369."

Details about the census records, and indexes for Colne.

The Register Office covering the Colne area is Burnley and Pendle.

You can see pictures of Colne which are provided by:

"COLNE, a chapelry and market town in the parish of Whalley, in the higher division of the hundred of Blackburn, in the county of Lancaster, 30 miles N. of Manchester, and 45 S.E. of Lancaster. It comprises the townships of Colne, Great and Little Marsden, Barrowford, Foulridge, and Trawden, together containing a population of 21,196. The market town of Colne is situated on Colne Water, a tributary of the Calder, and near the Leeds and Liverpool canal. It is the terminus of the Lancashire and Yorkshire, and also of the Midland system of railways. It contains a cloth-hall, a branch of the Craven bank, a savings-bank, gas and water works, besides several extensive cotton factories. The population is chiefly employed in the manufacture of fabrics suited for the Manchester and Bradford markets. Coal, excellent freestone, flags, and slate are abundant in the neighbourhood. There are two churches, St. Bartholomew's and Christ Church, both perpetual curacies, in the patronage of Hulme's Trustees, value £179 and £180 respectively. St. Bartholomew's is an ancient structure in the perpendicular style, built in 1515, and restored and enlarged in 1857. It has two chantry chapels, an ancient font, and a screen, in good preservation. Christ Church was built in 1836. The charities amount to £103 per annum. Acre are Baptist Inghamite, Wesleyan, Primitive Methodist, and Independent chapels. There is a grammar school, with a small endowment, at which Archbishop Tillotson is said to have been educated; besides National and British schools. In the vicinity many Roman antiquities have been discovered, which has led to the supposition that Colne was the Roman Colunio; this is supported by the existence of an extensive camp, 360 feet by 340, with double trench and vallum at Castor Cliff. A weekly market is held on Wednesday, and a monthly market for cattle on the same day. Fairs are held on the 7th March, 13th May, 11th October, and 21st December."

"LANE BRIDGE, a village in the parish of Whalley, county Lancaster, 2 miles from Burnley, and 21 N. of Manchester. It is situated near the junction of the rivers Barn and Calder, on the Lancashire and Yorkshire railway. Most of the inhabitants are engaged in the neighbouring cotton-spinning and printing mills, and in the collieries. The living is a perpetual curacy in the diocese of Manchester, value £150, in the patronage of the crown and bishop alternately. The church is a modern edifice dedicated to St. Paul. There are several Dissenting places of worship and schools."

In 1835 Colne was a township in the parish of Whalley.

You can see the administrative areas in which Colne has been placed at times in the past. Select one to see a link to a map of that particular area. 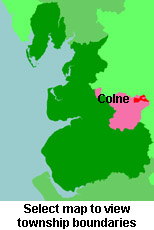 View maps of Colne and places within its boundaries.

Maps of Colne East and West around 1890.