"SOUTHWORTH-WITH-CROFT, a parish in Warington district, Lancashire; 1¾ mile SSW of Kenyon-Junction r. station, and 4¼ NE by N of Warrington. It has a post-office, of the name of Croft, under Warrington. Acres, 1,851. Real property, £4,255. Pop., 1,094. Houses, 228. The property is much subdivided. The living is a rectory in the diocese of Chester. Value, £230.* Patron, the Earl of Derby. The church is recent, and has a spire. There are chapels for Independent Methodists and Roman Catholics, and an endowed school."

Details about the census records, and indexes for Croft with Southworth.

The Register Office covering the Croft area is Warrington.

You can see pictures of Croft with Southworth which are provided by:

"CROFT, a hamlet in the parish of Winwick, hundred of West Derby, in the county of Lancaster, 3 miles S.E, of Newton, and 4 N. of Warrington. Joined with Southworth, it forms a township The living is a rectory in the diocese of Chester, in the patronage of the rector. The church, dedicated to Christ, is a new structure built in 1833, in the Gothic style. The Independents, Methodists, and Roman Catholics have each a chapel. There is an endowed school, also a Sunday-school."

"SOUTHWORTH-WITH-CROFT, a township in the parish of Winwick, hundred of West Derby, county Lancaster, 3 miles S.E. of Newton-in-Mackerfield. The village is considerable."

In 1835 Southworth with Croft was a township in the parish of Winwick.

You can see the administrative areas in which Croft with Southworth has been placed at times in the past. Select one to see a link to a map of that particular area. 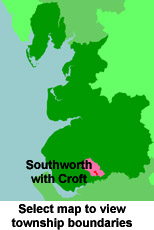 View maps of Croft and places within its boundaries.