CROSBY (Great), a village and a chapelry in Sephton parish, Lancashire. The village stands on the coast, near the river Mersey's mouth, 1¾ mile W of the Liverpool and Southport railway, 6½ miles NNW of Liverpool; is a much-frequented watering place; and has a station on the railway, a post office under Liverpool, and two hotels. The chapelry comprises 5,627 acres; of which 3,510 are water. Real property, £22,495. Pop., 3,794. Houses, 686. The property is much subdivided. Crosby House is the seat of John Myers, Esq. Crosby Point is near the village; Crosby lighthouse, 1¼ mile N of the Point, was erected in 1839, and shows a fixed light, 81 feet high; Crosby floating light is moored at the east elbow of the Burbo bank; and Crosby Channel, between that bank and the Formby, and about 6½ miles long, is the main entrance to. the Mersey. The living is a p. curacy in the diocese of Chester. Value, £119.* Patron, the Rector of Sephton. The church was built in 1854, is cruciform and handsome, and has a tower with lofty spire. There are an elegant Wesleyan chapel, built in 1863 at a cost of £5,000, a Roman Catholic chapel, an endowed grammar school, an endowed girls' school, and a Roman Catholic convent school.

Details about the census records, and indexes for Crosby.

The burials at SS Peter and Paul RC Church have been made available by the Anglo-Irish FHS.

The Register Office covering the Crosby area is Sefton South.

You can see pictures of Crosby which are provided by:

In 1835 Crosby was a chapelry in the township of Great Crosby, in the parish of Sefton.

You can see the administrative areas in which Crosby has been placed at times in the past. Select one to see a link to a map of that particular area. 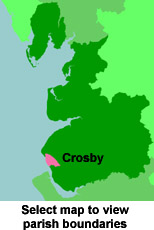 View maps of Crosby and places within its boundaries.