CROSTON, a village, a township, and a sub-district in Chorley district, and a parish partly also in Ormskirk district, Lancashire. The village stands on the river Yarrow, near the Liverpool and Preston railway, 6 miles W of Chorley; has a station on the railway, and a post office under Preston; and was once a market-town. The township comprises 2,343 acres. Real property, £6,224. Pop., 1,790. Houses, 346. The sub-district contains also Mawdesley, Bretherton, and Ulnes-Walton townships in Croston parish, and two townships in Eccleston parish. Acres, 13,042. Pop., 5,369. Houses, 1,013. The parish includes Bispham township in Ormskirk district. Acres, 10,648. Rated property, £16,959. Pop., 4,242. Houses, 803. The property is not much divided. Croston Hall is the seat of J. R. De Trafford, Esq. Several adjacent parishes were formerly parts of this. The living is a rectory in the diocese of Manchester. Value, £1,050.* Patrons, the Reps. of the late Archdeacon Master. The church is ancient and good. The rectories of Bretherton and Mawdesley are separate benefices. There are chapels for Wesleyans, Primitive Methodists, and Roman Catholics. A free school, alms-houses, and other charities have £832.

Details about the census records, and indexes for Croston.

The Register Office covering the Croston area is Chorley.

You can see pictures of Croston which are provided by:

"CROSTON, a parish in the hundred of Leyland, in the county of Lancaster, 6 miles W. of Chorley, its post town, and 8 from Preston. It is situated on the river Yarrow, and has a station on the West section of the Lancashire and Yorkshire railway. The parish contains the townships of Croston Mawdesley, Bretherton, Bispham, and Ulnes-Walton. The town was once a market town, and is still a populous place, containing about 1,500 inhabitants. In ancient times Croston was one of the richest benefices in the country, but it has at various periods been divided by parliament into six distinct parishes, namely, Croston and Hoole, separated in 1642, Chorley and Rufford in 1793, and Tarleton and Hesketh with Becconsall in 1821. The living is a rectory in the diocese of Manchester, value £1,050, in the patronage of the Rev. R. M. Master. The church, dedicated to St. Michael, is situated on the bank of the river Yarrow, and was rebuilt in 1743, at an expense of £1,834, defrayed by a brief. It is a large building in various styles; the tower contains a clock and eight bells. The charities amount to £832 per annum. The Wesleyans, Primitive Methodists, and Roman Catholics have chapels. There is a Free school, endowed in 1660 by the Rev. James Hiet, with about £15 per annum; also National and Sunday schools. J. R. De Trafford, and Thomas Norris, Esqs. are lords of the manor. A fair is held on the Monday before Shrove Tuesday."

In 1835 the parish of Croston contained the townships of Croston, Bretherton, Ulnes Walton, Mawdesley and Bispham.

You can see the administrative areas in which Croston has been placed at times in the past. Select one to see a link to a map of that particular area. 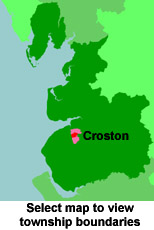 View maps of Croston and places within its boundaries.