DALTON, a township in Burton-in-Kendal parish, Lancashire; at the boundary with Westmoreland, adjacent to the Lancaster and Carlisle railway, 1¼ mile SE of Burton-in-Kendal. Acres, 2,135. Real property, £1,931. Pop., 129. Houses, 20.

Details about the census records, and indexes for Dalton.

The Register Office covering the Dalton area is Kendal.

You can see pictures of Dalton which are provided by:

Dalton was a Lancashire Township in the parish of Burton in Kendal in Westmorland.

You can see the administrative areas in which Dalton has been placed at times in the past. Select one to see a link to a map of that particular area. 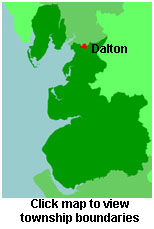 View maps of Dalton and places within its boundaries.