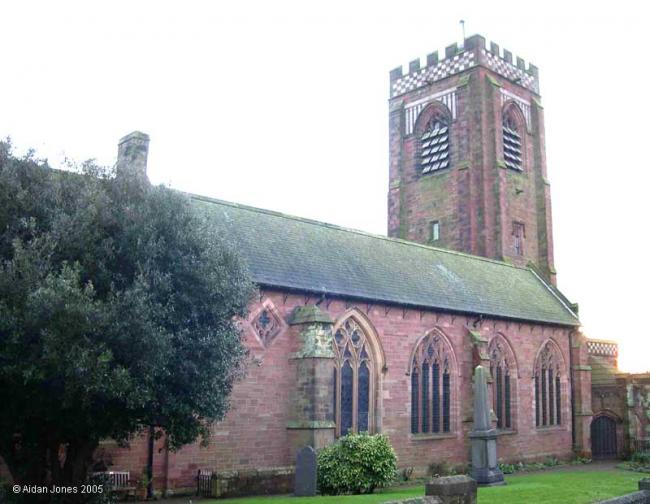 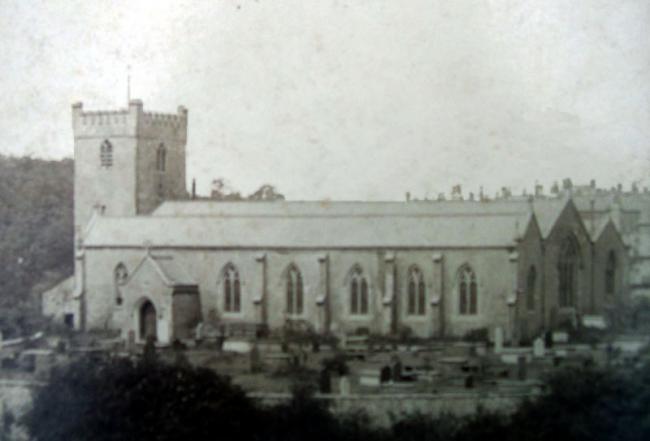 Barrow, though now a separate parish, was for some years dependent upon the mother-church of Dalton, and all its dead were carried thither for interment.   The limited extent of the burial-ground attached to the church, and the increasing number of interments, soon rendered necessary another and more commodious cemetery. Accordingly a Burial Board was formed ; the site fixed upon was the high ground rising from the Abbey Road and overlooking the lower portion of the village, which is well adapted for the purpose.

There are three separate transcripts of the church MIs held in the Cumbria Record Office, Barrow.

After 1862, most interments took place elsewhere at Dalton Cemetery.

The first written evidence of its existence occurs in a donation of the vicarage to William de Horhampt, by the Abbot and Convent of Furness in 1138. The church was rebuilt in 1882-5 and the following description is of the earlier church.

The Church stands on the edge of a steep rock, close by the castle, skirting the Vale of the Deadly Nightshade, in which repose the ruins of the Abbey. It was dedicated to St. Mary, and formerly exercised jurisdiction over the churches of Urswick, Ulverston, and Hawkshead. The date of its erection is unknown. Dr. Whitaker imagines that a church must have stood here previous to the founda­tion of the monastery ; but the omission of any reference to it in the charter of Stephen's grant to the Abbey is strong evidence to the contrary, since churches were seldom unrecorded in such documents. The first written evidence of its existence occurs in a donation of the vicarage to William de Horhampt, by the Abbot and Convent of Furness, between 11138 and 1200 A.D. About thirty years after this the cburch was appropriated to the Abbey by the Archbishop of York, securing, however, to the vicar certain privileges which had been enjoyed by his predecessors, and a salary of forty marks per annum. This indefinite arbitrament of the Archbishop, as might easily have been foreseen, afterwards led to misunderstanding and controversies between the parties as to the precise number and nature of the vicarial rights. In 1423, during the rectorship of Richard Spofforth, the matters in dispute had assumed such proportions as to call for the interference of the archdeacon of the diocese, whose province it was to hear and settle such controversed claims. His decision was that the abbot and his successors should have all manner of tithes, personal, praedial, and mixed, reserving, however, to the vicar the mansion house with the churchyard, the tithes of bread and ale within the town of Dalton, the candles offered at the Feast of the Purification of the Blessed Virgin in the said church, together with the yearly tribute of 26 marks. After the dissolution of the Abbey, Roger Pyle, the last abbot, received this rectory, valued at that time at £33 0s. 8d., as a solatium, and here he lived to lament his fallen great­ness, and mourn the sad change that had come over the once happy retreat.

The benefice is a stipendiary vicarage, formerly in the gift of the Chancellor of the Duchy of Lancaster, but transferred to the Bishop of Carlisle in 1872, and now in the incumbency of the Rev. J. M. Morgan. The living is returned at £350 net. The vicarage house is a neat building a short distance from the church, erected in 1825. The living was augmented in 1760 with £200 from Queen Anne's Bounty Fund ; £100 left by Dr. Stratford ; and £100 given by Lord George Cavendish. In 1764 the sum of £400 was invested in land ; and in 1844 the tithes were commuted for a yearly rent charge of £405.

The church has undergone many alterations since its first erec­tion, and was almost rebuilt in 1826, at a cost of £1,500, and further improved in 1832.In 1803 a very handsome stained glass window was placed in the east end by H. W. Schneider, Esq.A. few portions of the ancient structure have been retained in the restoration ; an old Norman arch, over the north door, rudely ornamented with grotesque figures, and in the south wall there is

"a little Gothic niche
Of nicest workmanship, that once had held
The sculptured image of some patron saint,"

and the walls of the tower all bear traces of antiquity. Within the church a massive old stone font has been preserved, having on one of its shields the armorial emblazonments of the Abbots of Furness and an inscription which is now illegible. This venerable relic stood for some tinge in the churchyard, exposed to the wasting effects of the elements and the Vandalism of an ignorant peasantry, until the Rev. Mr. Morgan, the present vicar, procured its removal into the interior. Every relic of the Past, whether the ivy-mantled wall of some ruined abbey, the mouldering porch of a rural church, or the shattered shaft of a wayside cross, speaks to the mind in a language silent and mystical, but yet impressive and intelligible. Each is a link in the chain of Time connecting the past with the present, and leading the mind by some mysterious power to the contemplation of the things that were. How vividly do they recall to our imagination the faith of our forefathers, their deep religious feeling and warm-hearted sympathy, their triumphs and their sufferings, and how favourably do they contrast with the apathy and spiritual indifferentism of the present age.

In the tower there is a peal of six bells, presented by subscription in 1865. The churchyard contains no monuments of antiquity, but here lie the remains of Romney, the celebrated painter, a native of this parish, under a plain stone slab, bearing the following inscription : "Georgins Romney, Armiger Pictor Celeberrimus. Obiit Nov. 15, 1802. Requiescat in Pace."

Two centuries and a half ago this parish was visited by the plague, and the town nearly depopulated. The disease raged from July to the following Eastor ; and a mound near the church is pointed out as the place where 360 victims were interred.

The following is a list of the vicars whose names have been preserved from the earliest mention of the church to the present time :- Gilbert, parson of Dalton, 1181-5 ; William de Horhampt, 1198 ; William Cockerham, before 1331 ; Richard Spofforth, before 1423 ; Robert Hartyngton, before 1473 ; Roger Pyle or Pele, the last Abbot of Furness, who received the vicarage as a solatium for the dissolution of his monastery ; Robert Wright ; Thomas Besbrowne, 1558 ; James Leis, 1573 ; Richard Gardiner ; William Bowett, 1617 ; Richard Tomlinson, 1631 ; Thomas Whitehead, ejected 1662 ; Anthony Turner, 1671 ; William Lodge ; John Walker, 1756 ; Christopher Couperthwaite, 1772 ; Joseph Thompson Kirkbank, 1823 ; James Morrison Morgan, 1849, the present vicar, after whose demise the parish will be divided.

The large increase in the population during the last few years rendered more church accommodation necessary, and, through the efforts of the present vicar, an iron church (St. Margaret's), capable of seating 1,000 persons, was erected, in which services are conducted by the Rev. G. W. Cole, B.A.