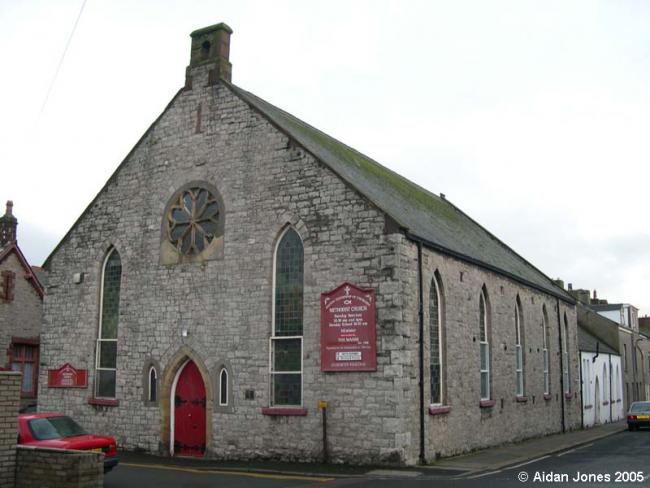 It was founded in 1823. The Wesleyans began meeting in a hayloft in the 1820s and erected a chapel in Skelgate sometime before 1828. They moved to the new chapel on Wellington Street in about 1864.

"We are indebted to the pen of an esteemed correspondent, Mr. Coates, master Of the Wesleyan School, for the following succint and interesting account of the origin, growth, and present position of the various Nonconformist Societies in Dalton :-

Before the year 1823 the Parish Church was the only building for public worship in the town.

The Wesleyan Methodists had at this time a small meeting house in Ulverston, to which, one Sunday morning in 1823, three earnest Dalton young men were walking, when they were accosted by a Primitive Methodist missionary, the Rev. F. N. Jersey, who inquired where they were going, and on hearing their answer, asked them to return with him, saying, 'I am going to storm Dalton.' They returned. An open-air service was held at the Market Cross that morning and on several subsequent Sundays. Organized opposition of a formidable kind soon showed itself. One morning some one had engaged three men to blow horns close to the ears of the missionary, and a quarrel ensued between these and others who wished to hear the preacher. The result was that a few days later Mr. Jersey was served with a warrant 'for conducting riotous and tumultuous worship at the Market Cross at Dalton,' and was by the magistrates committed to Lancaster Castle for four months, but he was afterwards bailed out. Thus the pioneer of Nonconformity in Dalton was a Primitive Methodist ; but we do not hear of this preacher visiting the town again, and the Primitives did not form a society here until many years afterwards.

By what means the three young men above mentioned were first led to attend the services at the Wesleyan Methodist meetingroom in Ulverston we cannot certainly tell. An old inhabitant of Dalton relates that Mr. William Ashburner, elder brother to one of them, went about this time to Leeds to see Dr. Haves. a noted physician there, and a Wesleyan, with whom he stayed for some time, returning to Dalton a converted Methodist, and that he won his brother George. But we hear nothing of this William Ashburner taking any active part with the Others in establishing the little society which Mr. George Ashburner, Mr. Robert Atkinson, and Mr. Henry Turner were soon engaged in forming.

On that Sunday morning when Mr. Jersey first visited Dalton he concluded his open-air service before the regular church service began. The young men who had returned with him attended the church service.   The clergyman, taking for his text ' Beware of false prophets,' strongly condemned the missionary and his services, and so reproached those who had listened to him, as doubtless to convince them they must have a separate place of worship of their own. But a room was not easily secured, and services were held for some time in a Quarry Hole at the top of Skelgate. At length one Jack Evans, a notorious character, who was at least a lover of fair play, declared the Methodists should not be crushed for want of a room, and placed an ` upper room' at their disposal, which was no other than a hayloft over a stable situated at the foot of Skelgate. The opposition these early Methodists met with is further seen in the following incident. They required a flight of decent stone steps by which they might ascend to their little sanctuary. But no mason could be found in the town who would undertake the work, and it was at length done by an outsider. In this room, in the year 1823, the Wesleyan Methodists established a society and a Sunday School.

The Rev. T. Rodgers, at a service in the Wesleyan chapel held in memory of the late Mr. Henry Turner already mentioned as active in founding the Society, thus graphically set forth the difficulties and persecution for some time endured by them :-' Such was the opposition the Methodists encountered that they dare scarcely be seen going to the meeting, but had to creep up back lanes and bye ways afraid of losing their situations if detected. The vicar of the parish was accustomed to stand at the cross watching these poor people going to the meeting, and with black up-lifted walking stick in hand would shake it in threatening menace against any who had the hardihood to enter the forbidden room. Sentimental opposition is painful. We do not like a sneer. But this opposition was more serious than one of sentiment. The district was at that time mainly agricultural.   The mining operations were comparatively insignificant and unremunerative. The Methodists consisted almost entirely of the very poor, Farm labourers, for a wage of 4s. a week and their meat, were glad to be employed. These were not days of artisan independence, and opposition meant probable loss of situation and livelihood to the members of this poor and persecuted flock. However spite of persecution, and possibly even by the help of it, the society and congregation grew.'

At what precise date the more commodious chapel at the top of Skelgate was completed we have not learnt, but it is certain that it was occupied as early as 1828. From that time until the year 1864, a period of nearly 40 years, it was the only nonconformist place of worship in the town, and the Wesleyans held it with a growing society and Sunday school, which necessitated, once during that period, its enlargement. The present chapel in Wellington Street was built in 1864 and in 1868 the Sunday and day schoolroom was added. The first Wesleyan minister resident in the town was the Rev. Ralph Spoor, who came in 1865.

In 2016 they became an ecumenical partnership withe the United Reformed Church and the Wellington Street church was closed, moving to the Market Street building.