DALTON-IN-FURNESS, a small town, a parish, and a sub-district in Ulverstone district, Lancashire. The town stands on the Furness railway, 1½ mile N of Furness abbey, and 5 SW of Ulverstone; is an ancient place, long the capital of Lower-Furness; consists of one street, spacious, antique, picturesque, and improved; and has a head post office, designated Dalton-in-Furness, Lancashire, a railway station, a chief inn, an ancient tower, a parish church, a Wesleyan chapel, and a free school. The tower crowns a rocky eminence on the west; and belonged to a castle, built in the time of Edward III., by the abbots of Furness, to guard the northern approach to the abbey. The church stands near the tower, and was rebuilt in 1825. Markets are held on Saturdays; and fairs on 6 June and 23 Oct. A hunt, called the "Dalton Rout" in the "Tatler, " was established here in 1703; but has gone into disuse. Romney, the painter, was a native. Pop., 2,812. Houses, 538. The parish includes also the townships of Hawcoat and Yarlside, the chapelries of Ireleth and Rampside, the hamlet of Biggar, and the islands of Peel, Barrow, Roa, and Walney. Acres, 16,364. Real property, £64,492; of which £4,025 are in mines, and £33,627 in railways. Pop., 9,152. Houses, 1,565. The property is much subdivided. Iron ore and limestone are plentiful: and mining and iron working are extensively carried on. Remains of a fortified-beacon occur on the eminence of High Haume. The living is a vicarage in the diocese of Carlisle. Value, £159.* Patron, the Duchy of Lancaster. The chapelries of Ireleth, Rampside, Barrow, and Walney are separate benefices. The sub-district contains three parishes. Acres, 25,158. Pop., 11,243.

The following books contain useful information about the history of Dalton in Furness and the surrounding area.

Details about the census records, and indexes for Dalton in Furness.

The Register Office covering the Dalton in Furness area is Barrow in Furness.

You can see pictures of Dalton-in-Furness which are provided by:

"IRELETH, a hamlet and chapelry in the parish of Dalton in Furness, hundred of Lonsdale North of the Sands, county Lancaster, 2 miles from Dalton, and 6 W. of Ulverston. The chapelry contains the villages of Lindale and Martin. It is situated on the river Dudden, and has a station at Lindale, on the Furness line of railway. The inhabitants are chiefly employed in the iron mines, of which there are a great number in the neighbourhood. The living is a perpetual curacy in the diocese of Carlisle, value £100, in the patronage of the Vicar of Dalton. The church is situated on rising ground overlooking the river Dudden. There are two parochial schools, one at Ireleth, and the other at Lindale."

"YARLESIDE, a division in the parish of Dalton-in-Furness, hundred of Lonsdale North of the Sands, county Lancaster, 3 miles S.W. of Dalton. It comprises several small villages and hamlets on the coast opposite Walney Island."

"KIRKBY-IRELETH, (or Irleth), a chapelry in the parish of Dalton-in-Furness, hundred of North Lonsdale, county Lancaster, 18 miles N.W. of Lancaster. It is situated near Morecombe Bay and the Furness line of railway. Iron ore and limestone are found. The living is a perpetual curacy in the diocese of Carlisle, value £100, in the patronage of the vicar."

"HAWCOAT, a hamlet in the parish of Dalton in Furness, hundred of Lonsdale North of the Sands, county Lancaster, 3 miles S.W. of Dalton, and 1½ mile N.W. of Furness Abbey railway station. In conjunction with the village of New Barns it forms a township. The soil is clayey loam, on a clay subsoil. There are some stone quarries. The village, which is small, is situated on an eminence commanding an extensive view, including the coast of Wales, the Isle of Man, the Fylde, and the town of Fleetwood. There is a National school at New Barns. The Duke of Buccleuch is lord of the manor."

IRELETH, a village and a chapelry in Dalton-in-Furness parish, Lancashire. The village stands at a st. of the Furness railway, on the E side of the Duddon sands, 2¾ miles N of Dalton; is a small sub port to Lancaster; and maintains communication across the sands at low water. The chapelry includes also the hamlets of Lindale and Marton; but does not appear to have definite limits. Post town, Dalton-in-Furness. The living is a p. curacy in the diocese of Carlisle. Value, £100.* Patron, the Vicar of Dalton. The church stands on an eminence, overlooking the Duddon.

You can see the administrative areas in which Dalton-in-Furness has been placed at times in the past. Select one to see a link to a map of that particular area.

A description of the history of Dalton up to the end of the 19th century. 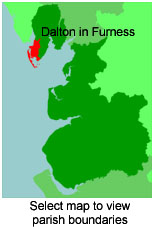 View maps of Dalton-in-Furness and places within its boundaries.