DENTON is a township in the parish of Manchester, extending 3 to 4 miles south-west from Ashton-under-Lyne to the Cheshire border of the county, with a station on the Stockport and Stalybridge branch of the London and North Western railway, 6 miles south-east from Manchester and 4½ north-east from Stockport, in the Gorton division of the county, hundred of Salford, union and petty sessional division of Ashton-under-Lyne, county court district of Hyde (Cheshire), rural deanery of Ashton-under-Lyne, archdeaconry and diocese of Manchester. By a Local Government Board Order, dated 10 April, 1884, Haughton, as a separate township, ceased to exist, and was incorporated with, that of Denton, a Local Board was formed March 24, 1867, with 3 members, and increased to 15 in 1877 on the amalgamation with Haughton. Under the Local Government Act, 1894, the township is now governed by an Urban District Council. The district is lighted with gas from works the property of the Urban Council.

This place has been from an early period the seat of the felt hat manufacture, the staple trade of the place. Coal mining is also extensively carried on. The Free Library, in Albert street, erected in 1888-9, in commemoration of the queen's jubilee, at a total cast of £2,700, is of red brick, in the Italian style and comprises on the ground floor a large reading room, library and reference room containing 2,000 volumes and residence for the librarian, and on the first floor, rooms for science and art classes; the library is managed by the Urban Council; adjoining the library are recreation grounds of about 5 acres laid out by the board at a cost of £5,000. Tho Conservative Club in Manchester road, opened by Sir William H. Houldsworth M.P. in 1892, is a structure of Accrington pressed bricks with ornamental cornices, relieved with Yorkshire stone dressings. It contains a large assembly hall, reading, billiard and other rooms, and is fitted with every modern improvement; the architect was Mr. T. D. Lindley, of Ashton-under-Lyne; the total cost was about £2,300: it has now (1894) 350 members. The Liberal Club, opened in 1894 was erected at a cost of nearly £3,000, and is a building of brick relieved with stone dressings. It contains a large public hall and ample accommodation for 400 members; the architect was Mr. Joseph Lindley, of Hyde.

Details about the census records, and indexes for Denton.

The Register Office covering the Denton area is Tameside.

Tameside Metropolitan Borough Council provide a range of information about the town.

You can see pictures of Denton which are provided by:

"DENTON, a chapelry in the parish of Manchester, hundred of Salford, in the county of Lancaster, 3½ miles S.W. of Ashton-under-Lyne, and 4 N.E. of Stockport. It is situated W. of the river Tame, and is a station on the Stockport and Staleybridge branch of the Manchester and Leeds railway. The chief business of the inhabitants is hat-making. There are extensive coal-mines. The living is a perpetual curacy in the diocese of Manchester, value £135, in the patronage of the Marquis of Westminster. The church is dedicated to St. James. There is another church called Christ Church, the living of which is a perpetual curacy, value £130, in the patronage of the crown and bishop alternately. The Wesleyans have a chapel. Denton Hall, once the family seat of the Hollands, is now a farm."

In 1835 Denton was a township and chapelry in the parish of Manchester.

You can see the administrative areas in which Denton has been placed at times in the past. Select one to see a link to a map of that particular area. 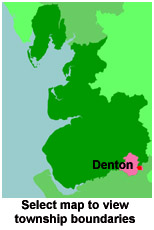 View maps of Denton and places within its boundaries.