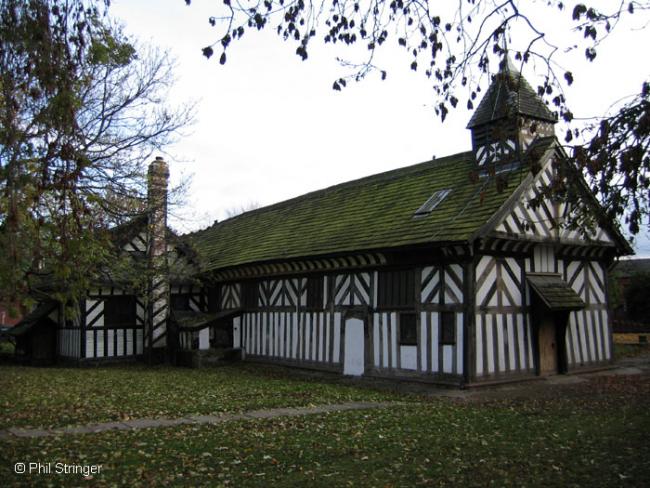 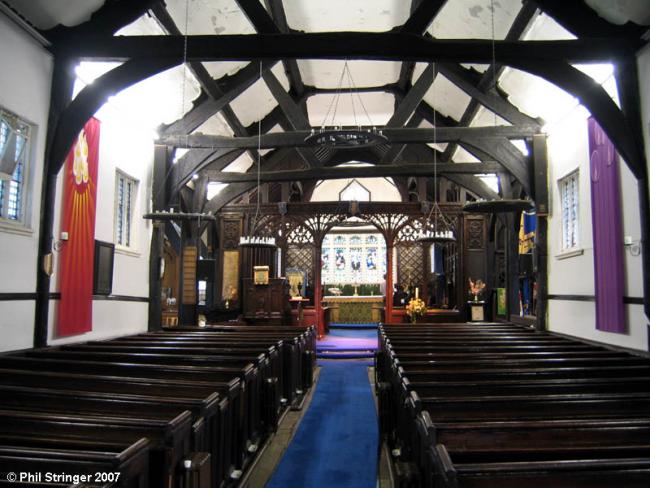 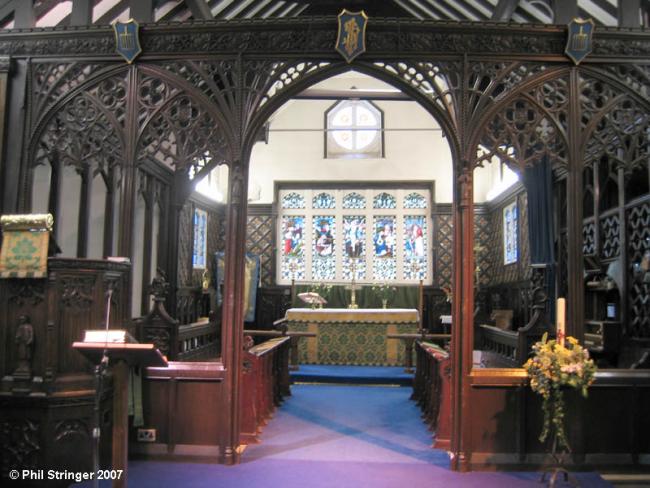 "St. Lawrence's is an ecclesiastical parish formed March 29, 1839, from the civil parish of Manchester, and reformed as a new district June 16, 1854; the church, in Stockport Road, is a curious old wood-framed edifice, erected by Rd. Holland esq. in 1468, consisting of chancel, nave, north and south transepts, south porch and a western turret containing a small bell. The church was enlarged in 1878 by the addition of a chancel and transepts, at a cost of £3,700: the east window is stained, and there are 684 sittings, 222 of which are free. The register dates for baptisms from 1604, marriages 1618, burials 1604. The living is a rectory, net yearly value £360, with residence, in the gift of the Earl of Wilton, and held since 1881 by the Rev. David Rowe."

The Monumental Inscriptions in the graveyard were recorded in the Owen Manuscripts (copies held at Lancashire Record Office).

The churchyard was grassed over in 1965 when the former Denton Council took it over under the Open Spaces Act, and, in accordance with that Act the gravestones were either removed, covered over or broken up. A few gravestones remain, though probably not in their original locations.

St Lawrence was founded in 1468. The original dedication to St. James was changed by the rector around 1800.

St Lawrence Church, Denton is a timber-framed Church dated from 1531 at the most conservative estimate. Of this type of common medieval building only 29 remain in England and Wales. These are scattered from Kent in the South East to Lancashire in the North West. Originally the timber-framed structure was neither a parish church nor dedicated to St. Lawrence. It began as a chapel of ease {a type of half-way house} for the medieval manor of Denton within the Parish of Manchester, dedicated to St. James. It became a parish church under the name St. Lawrence in 1839.

When the chapel was built in 1531, its original benefactors, the Hollands and Hydes, were staunch Roman Catholics. It stood firm also through the upheavals of the Puritan Era, under the leadership of the much-persecuted Puritan leader, John Angler. A later notable pastor, William Parr Greswell, began the process of re-shaping the chapel along more conventional liturgical lines, a process later accelerated in the era of the Tractarian Movement.

The Church was dedicated to St. Lawrence by Parr Greswell as a result of the discovery within the structure of fragments of glass depicting the martyrdom of St. Lawrence. These fragments are now incorporated into a window on the south side of the sanctuary. In response to the growth of the parish, as a result of the growing hat industry in Denton, the Church was expanded in 1872 to include 2 transepts and a chancel. 30 years later a decorative chancel screen was added