DIDSBURY, a township-chapelry and a sub-district, in Chorlton district, Lancashire. The chapelry is in Manchester parish; was constituted in 1838; lies on the river Mersey, at the boundary with Cheshire, 3 miles W of Stockport; and has a post office under Manchester. Acres, 1,527. Real property, £13,116. Pop., 1,829. Houses, 364. The property is much subdivided. Didsbury House is a chief residence. There are large cotton factories. The living is a rectory in the diocese of Manchester. Value, £180.* Patrons, Trustees. The church is old but very good; and has a tower. There is a Wesleyan Methodist College. There are also schools with £51 from endowment; and other charities with £17. The sub-district contains also three other townships. Acres, 5,948. Pop., 5,904. Houses, 978.

Details about the census records, and indexes for Didsbury.

The Register Office covering the Didsbury area is Manchester.

You can see pictures of Didsbury which are provided by:

"DIDSBURY, a chapelry in the parish of Manchester, hundred of Salford, in the county of Lancaster, 5 miles S. of Manchester, its post town, and 3½ W. of Stockport station. It is situated on the river Mersey, which separates it from Cheshire. There are extensive mills for spinning and bleaching cotton, called the Heaton Mersey Mills. The living is a recto in the diocese of Manchester, value £180, in the patronage of trustees. The church, dedicated to St. John, is an old stone building, the tower of which contains a peal of bells. In the interior are several monuments, and a stained-glass window. The charities amount to £68 per annum. There are schools for both sexes, also a Wesleyan Methodist college. R. M. Fielden, Esq., is lord of the manor. Cattle fairs are held on the 30th April and 2nd October."

In 1835 Didsbury was a township in the parish of Manchester.

You can see the administrative areas in which Didsbury has been placed at times in the past. Select one to see a link to a map of that particular area.

View maps of Didsbury and places within its boundaries. 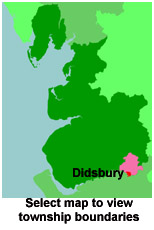