Details about the census records, and indexes for Dilworth.

The Register Office covering the Dilworth area is Preston.

You can see pictures of Dilworth which are provided by:

"DILWORTH, a township in the parish of Ribchester, lower division of the hundred of Blackburn, in the county of Lancaster, 7 miles N.E. of Preston. It contains part of Longridge."

"LONGRIDGE, a village and chapelry in the township of Dilworth and parish of Ribchester, lower division of the hundred of Blackburn, county palatine of Lancaster, 4 miles W. of Clitheroe. It is situated on the road from Preston to Clitheroe, near the river Ribble, and in the vicinity of Longridge Fell. There is a railway from Preston to the Fell, constructed chiefly for the conveyance of freestone from the celebrated "Delphs." A hospital is said to have been founded here at a distant period for a master and brethren, and dedicated to the Virgin Mary and our Saviour. The living is a perpetual curacy in the diocese of Manchester, value £170, in the patronage of Hulme's trustees. The church, dedicated to St. Lawrence, had a new tower built to it in 1841. Fairs are held on St. Lawrence's Day, 16th March, 16th April, Monday in Passion week, and 5th November, for the sale of live stock."

LONGRIDGE, a village and a chapelry in Ribchester parish, Lancashire. The village stands in the townships of Alston, Hothersall, and Dilworth, on the SW slope of Longridge fell, 1½ mile SW of the terminus of the Preston and Longridge railway, 2 N of the river Ribble, 3½ W by N of Ribchester, and 7 N E of Preston; is a populous and thriving place; carries on nail-making, cotton-spinning, and the manufacture of various cotton fabrics; conducts a large trade in the transport, by railway, of building-stone from neighbouring quarries; and has a post office, under Preston, a railway station, and fairs on 16 Feb., 16 March, 16 April, Holy Monday, and 5 Nov. The railway to it from Preston was opened in 1840. The chapelry was constituted in 1861. Pop., 2,057. Houses, 402. Several reservoirs of the Preston water-works are here. Longridge fell is a hill about 5½ miles in length, extending north-eastward from Longridge village to the vicinity of the river Hodder at the boundary with Yorkshire. The living is a vicarage in the diocese of Manchester. Value, £170. Patrons, Hulme's Trustees. The church was rebuilt in 1823; and consists of a nave, with a tower. There are an Independent chapel, built in 1865; a Wesleyan chapel, built in 1836; a Roman Catholic chapel, built in 1864, in lieu of a previous small one; and a national school, built in 1832.

In 1835 Dilworth was a township in the parish of Ribchester.

You can see the administrative areas in which Dilworth has been placed at times in the past. Select one to see a link to a map of that particular area. 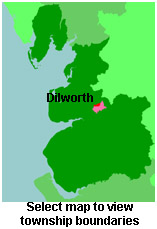 View maps of Dilworth and places within its boundaries.