LITHERLAND, a township, a chapelry, and a subdistrict in Sefton parish, West Derby district, Lancashire. The township lies on the coast, on the Southport and Liverpool railway, and on the Leeds and Liverpool canal, 4 miles N by W of Liverpool; and contains the hamlet of Seaforth and a portion of Waterloo, each of which has a station on the railway and a post office under Liverpool. Acres, 1,914; of which 7 5 are water. Real property, £19,961. Pop. in 1851, 2,252; in 1861, 3,632. Houses, 597. The increase of pop. arose from proximity to the harbour of Liverpool, and to the extension of trade there. The manor belongs to the Earl of Sefton; and much of the land, to him, and to the Right Hon. W. E. Gladstone. Seaforth Hall and Seaforth House are chief residences; but a great many fine villas are in Seaforth and Waterloo, and command charming views of the Mersey. The chapelry was constituted in 1842, and includes but a portion of the township; the rest of which is in the two chapelries of Waterloo. The living is a p. curacy in the diocese of Chester. Value, £87.* Patron, the Rector of Sefton. The church is a handsome structure of white stone; and consists of nave, aisles, transepts, and chancel, with tower and spire. There is a national school. The sub-district contains all the township, and also five other townships of Sefton. Acres, 6,269. Pop., 5,084. Houses, 836.

Details about the census records, and indexes for Down Litherland.

The Register Office covering the Down Litherland area is Sefton South.

You can see pictures of Down Litherland which are provided by:

"LITHERLAND, (or Waterloo), a township in the parish of Sefton, hundred of West Derby, county Lancaster, 5 miles N.W. of Liverpool, its post town. This township, which is situated near the coast, includes the hamlet of Seaforth, a watering-place, and a portion of Waterloo. It is traversed by the Leeds canal and Southport railway. The living is a perpetual curacy annexed to the rectory of Sefton, in the diocese of Chester. The church, which is situated at Seaforth, is dedicated to St. Thomas. It is a neat edifice with a round tower, and was erected in 1815 at the expense of the late Sir John Gladstone. There .are two National schools, also a Roman Catholic school. Seaforth Hall and Seaforth House are the principal residences. The Earl of Sefton is lord of the manor.

"SEAFORTH, a village and chapelry in the township of Litherland, parish of Sefton, county Lancaster, 4½ miles N.W. of Liverpool. It is a station on the W. section of the Lancashire and Yorkshire railway. It is situated near the Leeds canal, and is resorted to for sea bathing. The living is a perpetual curacy in the diocese of Chester, value £87. The church, dedicated to St. Thomas, was erected in 1815."

SEAFORTH, a village and a chapelry in Sefton parish, Lancashire. The village stands on the coast, adjacent to the Liverpool and Southport railway, 4¼ miles N N W of Liverpool; and has a station on the railway, a post-office under Liverpool, and a hotel. The chapelry has no defined limits; but contains S. Hall, S. House, and numerous other good residences. The living is a p.curacy in the diocese of Chester. Value, £150.* Patron, Sir T. Gladstone. The church was built in 1815, and has an octagonal tower, with eight pinnacles.

In 1835 Down Litherland was a township in the parish of Sefton.

You can see the administrative areas in which Down Litherland has been placed at times in the past. Select one to see a link to a map of that particular area. 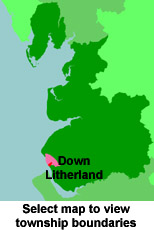 View maps of Litherland and places within its boundaries.