Details about the census records, and indexes for Edge Hill.

The Register Office covering the Edge Hill area is Liverpool

You can see pictures of Edge Hill which are provided by:

"EDGEHILL, a chapelry in the parish of Walton-on-the-Hill, hundred of West Derby, county palatine of Lancaster. It is within the limits of the borough of Liverpool, about 1 mile to the S.E., and forms a pleasant suburb, including the Liverpool Botanic Garden. At this point the Manchester railway branches off into two long tunnels, which lead to different stations in the town. One of these tunnels, at Lime-street, is 2,000 yards long; another, passing under Crown-street, 2,216 yards in length. The living is a perpetual curacy in the diocese of Chester, value £250. The church, dedicated to St. Mary, is a modern building. The Baptists have a chapel, and there is a National school."

In 1835 Edge Hill was a chapelry in the township of West Derby, in the parish of Walton on the Hill.

You can see the administrative areas in which Edge Hill has been placed at times in the past. Select one to see a link to a map of that particular area. 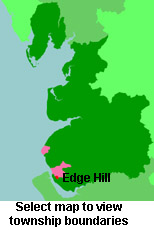 View maps of Edge Hill and places within its boundaries.