ELLEL, a township, a chapelry, and a sub-district, in Lancaster district, Lancashire. The township is in Cockerham parish; lies adjacent to the Lancaster canal, and the Lancaster and Preston railway, near Galgate station, 4 miles S by E of Lancaster; and is cut into two divisions, north and south. Post town, Galgate, under Lancaster. Real property of the N div., £5,243; of the S div., £3,895, of which £10 are in quarries. Pop. of the whole, in 1851, 1,484; in 1861, 1,968. Houses, 369. The increase of population arose from the erection of a silk factory, and the re-opening of a cotton factory. Ellel Grange and Ellel Hall are chief residences. The chapelry is less extensive than the township, and was constituted in 1858. Pop., 1,877. Houses, 351. The living is a vicarage in the diocese of Manchester. Value, £150.* Patron, the Vicar of Cockerham. The church is good; and there are three dissenting chapels and two public schools. The sub-district contains also three other townships and an extra-parochial tract. Acres, 28,888. Pop., 4,020. Houses, 715.

Details about the census records, and indexes for Ellel.

The Register Office covering the Ellel area is Lancaster.

You can see pictures of Ellel which are provided by:

"NORTH ELLEL, (and South Ellel) a township and chapelry in the parish of Cockerham, hundred of Lonsdale South of the Sands, county palatine of Lancaster, 4 miles S.E. of Lancaster, its post town. Bay Horse and Galgate stations on the London and North-Western railway are both in this township. It is situated on the river Condor and the Preston canal, and contains the villages of Dolphinholme and Galgate. Here are two silk mills and a worsted factory, giving employment to most of the inhabitants. The living is a perpetual curacy in the diocese of Manchester, value £150, in the patronage of the Vicar of Cockerham. The church is a stone edifice dedicated to St. John. The parochial charities produce about £5 per annum. There is a National school for both sexes, also an infant school. Ellel Hall and Ellel Grange are the principal residences.

In 1835 Ellel was a township in the parish of Cockerham.

You can see the administrative areas in which Ellel has been placed at times in the past. Select one to see a link to a map of that particular area.

View maps of Ellel and places within its boundaries. 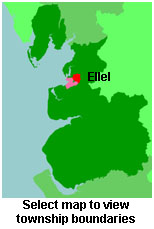