EVERTON, a suburban township, seven chapelries, and a sub-district, in Walton-on-the-Hill parish, West Derby district, Lancashire. The township is suburban to Liverpool; lies within Liverpool borough, on the NE side of the town, contiguous to Kirkdale; and has a post office under Liverpool, 1½ mile distant from the Liverpool head-office. It had a village older than Liverpool, situated on an eminence, commanding an extensive view over the Mersey to Wales and the Irish channel; but it takes its present character from the growth and prosperity of Liverpool; has long been a favourite residence of many merchants; and comprises numerous airy streets and numerous elegant villas. It contains the cottage occupied by Prince Rupert in 1644; a mansion, called St. Domingo, built with money accruing from a French prize ship; the workhouse of West Derby district; the Liverpol hospital for infections diseases, about to be rebuilt in 1869; the Liverpool collegiate institution; several national or other public schools; a public cemetery, formed in 1825; St. George's church, built in 1814, at a cost of £12,000; four churches built between 1829 and 1857; St. Saviour's church, in the Lombardic style, at a cost of £5,400, built in 1866; Emmanuel church, of very costly character, built in 1867; two Scotch Presbyterian chapels, built in 1863 and 1866; several English dissenting chapels; and a Roman Catholic church, designated St. Edward's college church, built in 1859 to the extent of three eastern chapels, measuring internally 280 feet in length, possessing fine features of the mediaeval style of architecture, and designed as part of an intended cathedral. Acres of the township, 700. Real property, £162,758; of which £742 are in quarries. Pop. in 1851, 25,883; in 1861, 54,848. Houses, 9,288. The chapelries are St. George, St. Augustine, St. Chrysostom, St. Peter, Christchurch, St. Saviour, and Emmanuel. The living of St. Chrysostom is a vicarage, and the other livings are p. curacies, in the diocese of Chester. Value of St. George and St. Augustine, each £300; of St. Chrysostom, £400; of the others, not reported. Patron of Christchurch, T. B. Horsfall, Esq.; of Emmanuel, I - D. Anderson, Esq.; of St. Peter, not reported; of the others, Trustees. The sub-district includes also the township of Kirkdale. Acres, 1,832. Pop., 70,983. Houses, 11,830.

Details about the census records, and indexes for Everton.

The Register Office covering the Everton area is Liverpool

You can see pictures of Everton which are provided by:

"EVERTON, a township in the parish of Walton-on-the-Hill, in the borough of Liverpool and county palatine Lancaster, 1 mile N. of Liverpool, of which it is a populous suburb. It is situated on high ground, commanding fine views over the sea, the town of Liverpool, the river Mersey, and part of Cheshire. There are quarries of red sandstone, and extensive water-works. The union workhouse for West Derby is in this township. There are five district churches, viz. St. George's, St. Augustine's, Christchurch, St. Peter's, and St. Chrysostom's; that dedicated to St. George was erected in 1814, at the cost of £12,000; it stands on the spot formerly occupied by the beacon erected in the 13th century by Ranulph de Blundeville. All the livings are perpetual curacies in the diocese of Chester, the two first-named of the value of £200. Here is a Roman Catholic cathedral not yet completed."

In 1835 Everton was a township in the parish of Walton on the Hill.

You can see the administrative areas in which Everton has been placed at times in the past. Select one to see a link to a map of that particular area. 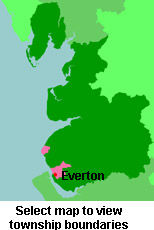 View maps of Everton and places within its boundaries.