This is the Farnworth in the parish of Deane. See also Farnworth near Widnes.

"FARNWORTH, a town, a township, a chapelry, and a sub-district in Deane parish and Bolton district, Lancashire. The town stands near the Bolton and Manchester railway, 3 miles SE of Bolton; has a post office under Bolton, and a railway station with telegraph, jointly with Halshaw-Moor, on the railway; publishes a weekly newspaper; is a seat of cotton manufacture, and of the iron trade; is also the place where the late Mr. T. B. Crompton, for some time, carried on one of the largest paper-works in the kingdom; and is regarded, in statistics, as co-extensive with township. Acres of the township, 1, 450. Real property, £26,684; of which £3,249 are in mines, £40 in quarries, and £839 in gas-works. Pop. in 1851, 6,389; in 1861, 8,720. Houses, 1,720. The property is much subdivided. The increase of pop. arose from the erection of cotton mills and the establishment of foundries. A public park for Bolton is situated at Farnworth; was presented by T. Barnes, Esq., M. P. for Bolton; was inagurated, in 1864, by Mr. Gladstone; and is estimated to be worth nearly £13,000. The chapelry includes also the township of Kersley; and was constituted in 1828. Pop., 13,723. Houses, 2,714. The living is a vicarage in the diocese of Manchester. Value, £300.* Patrons, Hulme's Trustees. The church is modern, in the pointed style, and cost £8,000. A tract, with a pop. of 4,000, was formed, in 1866, into the separate charge of New Bury. There are two Church schools, used as chapels of ease; an Independent chapel, built in 1863, at a cost of £2,500; a Wesleyan chapel, built in 1862, at a cost of £4,000; P. Methodist, Swedenborgian, and Roman Catholic chapels; and a national school. The sub-district is conterminate with the chapelry."

Details about the census records, and indexes for Farnworth.

The Register Office covering the Farnworth area is Bolton.

You can see pictures of Farnworth which are provided by:

"FARNWORTH, a township and ecclesiastical district in the parish of Deane, hundred of Salford, county palatine Lancaster, 3 miles S.E. of Bolton-le-Moors, and 81 N.W. of Manchester, its post town. The West Lancashire and Yorkshire railway has a station here. The village is large, forming a suburb of Great Bolton. The inhabitants are employed in the coal-mines, vitriol works, and in the cotton and paper mills, all of which are of considerable extent. The living is a vicarage with Kersley annexed, in the diocese of Manchester, value £300, in the patronage of Hulme's Trustees. The church is a Gothic edifice dedicated to St. John. The Independents, Wesleyans, Primitive Methodists, Roman Catholics, and Swedenborgians have chapels, and there are National and infant schools."

In 1835 Farnworth was a township in the parish of Deane.

You can see the administrative areas in which Farnworth has been placed at times in the past. Select one to see a link to a map of that particular area. 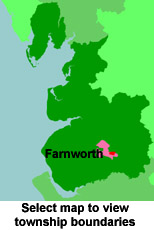 View maps of Farnworth and places within its boundaries.