FLEETWOOD, a town and a chapelry in Poulton-le-Fylde parish, Lancashire. The town stands on the river Wyre, within 2 miles of the open sea, and 18 NW of Preston. Its site, so late as 1836, was a mere rabbit warren; but was observed by its proprietor, Sir P. H. Fleetwood, to be situated so advantageously for inter-communication between the great marts of England and the seaports of the Isle of Man and the North of Ireland, that he determined to make it a seat of commerce. The town has a post office under Preston, a railway station with telegraph, good hotels, a good market-place, bazaars and fancy shops, a custom-house, gas-works, public bathing establishments, a coast-guard station, a large military school, extensive barracks, a large national school, a mechanics' institute, a literary institution, a church, and Independent, Wesleyan, Primitive Methodist, and Roman Catholic chapels. The literary institution was erected, in 1864, at a cost of about £3,000; and is in the Gothic style. The church is a stone edifice, in the early English style. A weekly market is held on Friday; various kinds of industry, suitable to a port, are carried on; and a weekly newspaper is published. The amount of customs, in 1867 was £3,716. Steam-vessels sail regularly to Belfast and Londonderry. Fleet-wood has been regarded as a good starting point for tourists from the south to the Lake district, by way of Piel pier and Furness. Pop. of the town, in 1861, 3,834. Houses, 546. The chapelry is part of the township of Thornton-with-Fleetwood-on-Wyre; and was constituted in 1841. Acres of the township, 9,730; of which 4,550 are water. Real property, £16,459; of which £200 are in gas-works. Pop. in 1851, 4,134; in 1861, 5,084. Houses, 708. Pop. of the chapelry, 4,258. Houses, 547. The living is a p. curacy in the diocese of Manchester. Value, £150. Patron, Sir P. H. Fleetwood.

Details about the census records, and indexes for Fleetwood.

The Register Office covering the Fleetwood area is Blackpool & Fylde.

You can see pictures of Fleetwood which are provided by:

"LARKHAM, a hamlet on the coast in county Lancaster, 5 miles N.W. of Poulton-le-Fylde."

Fleetwood was built in the township of Thornton in the parish of Poulton le Fylde.

You can see the administrative areas in which Fleetwood has been placed at times in the past. Select one to see a link to a map of that particular area. 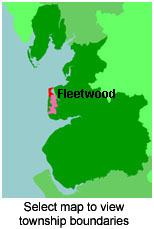 View maps of Fleetwood and places within its boundaries.