GARSTON, a small town, a township, and a chapelry, in Childwall parish, Lancashire. The town stands on the Mersey, and on the Warrington, Garston, and Liverpool railway, 6 miles SE of Liverpool; was once noted for extensive salt-works; is now a sub-port to Liverpool, with new docks; and has a railway station with telegraph, and a post office under Liverpool. The town ship includes also Aigburth, a suburb of Liverpool. Acres, 3,293; of which 1,665 are water. Real property, £31,643. Pop. in 1851, 2,756; in 1861, 4,720. Houses, 763. The chapelry includes only the eastern part of the township; excludes Aigburth; and was constituted in 1828. Pop., 2,016. Houses, 356. The property is much subdivided. The living is a vicarage in the diocese of Chester. Value, £138.* Patron, Richard Watt, Esq. The church is very good; and there are two dissenting chapels, Church schools, and charities £12.

Details about the census records, and indexes for Garston.

The Register Office covering the Garston area is Liverpool.

You can see pictures of Garston which are provided by:

"ST. ANNE AIGBURTH, a hamlet in the chapelry of Garston, parish of Childwall, and hundred of west Derby, in the county palatine of Lancaster, 4 miles to the S.E. of Liverpool. It is on the river Mersey. The living is a curacy in the diocese of Chester, in the patronage of trustees. Aigburth Hall is the chief residence.

"GARSTON, a chapelry in the parish of Childwall, hundred of West Derby, county palatine Lancaster, 5 miles S.E. of Liverpool, its post town. It is situated on the river Mersey, and includes the townships of Aigburth and Speke, and is a station on a branch line of the Stockport and Warrington railway. Extensive salt-works give employment to most of the inhabitants. There is a district church, the living of which is a perpetual curacy in the diocese of Chester, value £138. The charities produce about £12 yearly."

"AIGBURTH, a chapelry in Childwall parish, Lancashire; 4½ miles E of Liverpool. It has a post office under Liverpool. Pop., 1,994. Houses, 338. The living is a vicarage in the diocese of Chester. Value, £400. Patrons, Trustees. The church was built in 1853. There are Wesleyan and Roman Catholic chapels."

In 1835 Garston was a township in the parish of Childwall.

You can see the administrative areas in which Garston has been placed at times in the past. Select one to see a link to a map of that particular area. 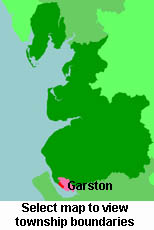 View maps of Garston and places within its boundaries.