GOLBORNE, a parish in Leigh district, Lancashire; on the Wigan and Newton railway, 2 miles NNE of Newton. It has a station on the railway, and a post office under Warrington. It was formerly a township of Winwick parish. Acres, 1,634. Real property, £6,683; of which £1,038 are in mines. Pop. in 1851, 1,910; in 1861, 2,776. Houses, 513. The increase of pop. arose from the demand for operatives in cotton factories. The property is subdivided. Golborne Hall is a chief residence. The living is a rectory in the diocese of Chester. Value, £110.* Patron, the Earl of Derby. The church is a modern edifice, in the early English style; and consists of nave, S aisle, and chancel, with porch and tower. There are an Independent chapel, a Roman Catholic chapel, erected in 1863, a Church of England school, and charities £36.

Details about the census records, and indexes for Golborne.

The Register Office covering the Golborne area is Wigan and Leigh.

You can see pictures of Golborne which are provided by:

"GOLBORNE, a township in the parish of Winwick, hundred of West Derby, county palatine of Lancaster, 2 miles N.E. of Newton, and 7 N. of Warrington, its post town. The London and North- Western railway has a station here. Cotton spinning is carried on in this neighbourhood. The village is of considerable extent. The living is a perpetual curacy in the diocese of Chester, value 2110, in the patronage of the Earl of Derby. The church is a modern stone structure, dedicated to St. Thomas. The charities produce about £30 per annum for the poor. There is an endowed school, also a National school for both sexes. Golborne Park and Heywood Hall are the principal residences."

In 1835 Golborne was a township in the parish of Winwick.

You can see the administrative areas in which Golborne has been placed at times in the past. Select one to see a link to a map of that particular area. 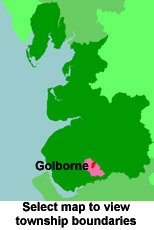 View maps of Golborne and places within its boundaries.