HARWOOD (GREAT), a town, a township-chapelry, and a sub-district in Blackburn parish and district, Lancashire. The town stands near the Leeds and Liverpool canal, 1½ mile SW of the river Calder, 2¼ SE of Ribchester r. station, and 4½ NE of Blackburn; is a rising place, well built of native stone; nearly doubled its population in the ten years prior to 1865; is governed by a local board of health; and has a post office under Accrington, a news-room, cotton mills, a national school, a church, and chapels for Independents, Wesleyans, Primitive Methodists, and Roman Catholics. The church is ancient, and has a west tower. The Roman Catholic chapel is a handsome edifice of 1860. Pop., in 1861, 3,294. Houses, 637. The chapelry comprises 2,510 acres. Real property, £9,521; of which £75 are in gasworks, and £85 in quarries. Pop. in 1851, 2,548; in 1861, 4,070. Houses, 782. The manor belongs to James Lomax, Esq. The living is a p. curacy in the diocese of Manchester. Value, £200. * Patron, the Vicar of Blackburn. The sub-district contains also two other townships of Blackburn parish, and one of Whalley. Acres, 6,950. Pop., 10,220. Houses, 1,952.

Details about the census records, and indexes for Great Harwood.

The Great Harwood site has information about each of the local churches.

The Register Office covering the Great Harwood area is Hyndburn and Rossendale.

You can see pictures of Great Harwood which are provided by:

"GREAT HARWOOD, a township and chapelry in the parish and hundred of Blackburn, county Lancaster, 4½ miles N.E. of Blackburn. It is situated near the Leeds and Liverpool canal, and is of considerable extent, the land being chiefly arable and pasture, with some woodland. The village is very considerable, and contains the mills of the Commercial Company (Limited), and several other cotton mills, which give employment to the population. The living is a perpetual curacy in the diocese of Manchester, value £200, in the patronage of the Vicar of Blackburn. The church of St. Bartholomew is an ancient edifice, with a square tower containing one bell. The Independents have a chapel, and a school endowed with £15 per annum. The other charities produce about £30 per annum.

In 1835 Great Harwood was a township in the parish of Blackburn.

You can see the administrative areas in which Great Harwood has been placed at times in the past. Select one to see a link to a map of that particular area.

A few notes about the history of Great Harwood. 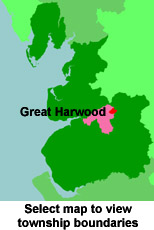 View maps of Great Harwood and places within its boundaries.