Details about the census records, and indexes for Great & Little Marsden.

The Register Office covering the Great Marsden area is Burnley and Pendle.

You can see pictures of Great Marsden which are provided by:

"GREAT AND LITTLE MARSDEN, a township in the parish of Whalley, higher division of the hundred of Blackburn, county Lancaster, 3 miles N.E. of Burnley. Whalley is its post town. It has a station on the East Lancashire line of railway, and there is also one at Nelson. Little Marsden is the most populous township, and is situated on the turnpike road leading from Burnley to Colne, and near the river Calder. The township of Great Marsden was formed into a district parish under Sir Robert Peel's Act. A large trade is done in cotton spinning and manufacturing. There are extensive collieries and stone quarries. The soil is of various quality, resting on a subsoil of carboniferous limestone and slate. The land is almost wholly in pasture. The living is a perpetual curacy in the diocese of Manchester, value £150, in the patronage of the crown and bishop alternately. The church, dedicated to St. John, is a neat stone structure erected in 1848 at an expense of £2,050, the greater part of the sum being defrayed by Mrs. Walton and Mrs. Moore. An endowed school for both sexes was founded by the above-named ladies. The living of Little Marsden is a perpetual curacy, value £150, in the patronage of Hulme's trustees. The church is a neat stone structure. There are two National schools, and places of worship for the Wesleyans, Independents, Baptists, and Society of Friends. In the vicinity is Castor Cliff camp, surrounded by a double ditch.

In 1835 Great and Little Marsden was a township in the parish of Whalley.

You can see the administrative areas in which Great Marsden has been placed at times in the past. Select one to see a link to a map of that particular area. 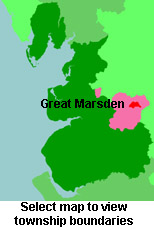 View maps of Great Marsden and places within its boundaries.