SANKEY (Great), a township and a chapelry in Prescot parish, Lancashire. The township lies on the Sankey canal, the Grand Junction railway, and the Warrington and Liverpool railway, 2½ miles W of Warrington; and has a station on the latter railway, and a post-office under Warrington, both of the name of Sankey-Bridges. Acres, 1,909. Real property, £3,842. Pop., 563. Houses, 108. The manor belongs to the Hon. L. Powys. Barrow Hall is the residence of J. A. Wright, Esq. railway viaducts here cross the S. canal; and that of the Grand Junction railway has 9 arches. The chapelry was originally conterminate with the township, but was greatly extended in 1865. Pop., 1,347. The living is a p. curacy in the diocese of Chester. Value, £120.* Patron, the Hon. L. Powys. The church is an old brick building. There is a national school.

Details about the census records, and indexes for Great Sankey.

The Register Office covering the Great Sankey area is Warrington.

You can see pictures of Great Sankey which are provided by:

"GREAT SANKEY, a chapelry in the parish of Prescot, county Lancaster, 2½ miles S.W. of Warrington, its post town, and 7½ N. E. of Prescot. It has a station at Sankey Bridges, on the Grand Junction railway. The village is situated on Sankey Brook, and on the old Manchester and Liverpool turnpike road. The railway viaduct crosses the Sankey canal near this place. The latter was constructed in the years 1755-68, being the first canal made in England. It is 10 miles in length, and has 10 locks, with a fall of 78 feet from St. Helen's, where it commences, to the Mersey, from which place it was lengthened 30 miles to Runcorn Gap. The living is a perpetual curacy in the diocese of Chester, value £103. The church, dedicated to St. Mary, is an ancient structure, with a tower containing a clock and one bell. The parochial charities produce about £3 per annum. There is a day school for both sexes, in which a Sunday-school is also held. Lord Lilford is lord of the manor.

In 1835 Great Sankey was a township in the parish of Prescot.

You can see the administrative areas in which Great Sankey has been placed at times in the past. Select one to see a link to a map of that particular area. 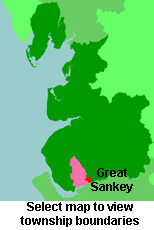 View maps of Great Sankey and places within its boundaries.