HABERGHAM EAVES, a township and a chapelry in Whalley parish, Lancashire. The township is suburban to Burnley; includes a town continuous with Burnley; lies partly within Burnley borough; and shares in that town's communications and employments. Acres, 4,007. Real property, £55,673; of which £7,668 are in mines, and £206 in quarries. Pop. in 1851, 12,549; in 1861, 18,013. Houses, 3,369. Pop. of the part within Burnley borough, in 1861, 11,469. Houses, 2,094. The increase of pop. arose from the erection of cotton mills. Coal is largely worked. The manor belongs to the Duke of Buccleuch; and other chief properties belong to four landowners. The chapelry is less extensive than the township; and was constituted in 1842. Pop. in 1861, 11,533. Houses, 2,195. The living is a p. curacy in the diocese of Manchester. Value, £350.* Patrons, Hulme's Trustees. The church stands in Trinity street; is in the Tudor style; and consists of nave, aisles, and chancel, with a tower. There are several dissenting chapels, national schools, and charities £37.

Details about the census records, and indexes for Habergham Eaves.

The Register Office covering the Habergham Eaves area is Burnley and Pendle.

You can see pictures of Habergham Eaves which are provided by:

"HABERGHAM-EAVES, a township in the parish of Whalley, higher division of the hundred of Blackburn, county Lancaster, 2 miles S.W. of Burnley. It is situated near the Leeds and Liverpool canal. The greater part of the population are employed in the manufacture of cotton and wool, and in working the collieries. Slate and stone are also quarried. The living is a perpetual curacy in the diocese of Manchester, value £300. The church is dedicated to St. Paul. There is another church dedicated to All Saints, also a perpetual curacy, value £150, in the patronage of the crown and bishop alternately. The charities produce £37 per annum."

In 1835 Habergham Eaves was a township in the parish of Whalley.

You can see the administrative areas in which Habergham Eaves has been placed at times in the past. Select one to see a link to a map of that particular area. 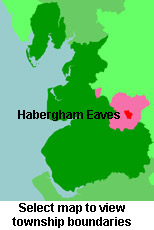 View maps of Habergham and places within its boundaries.