Details about the census records, and indexes for Haigh.

The Register Office covering the Haigh area is Wigan and Leigh.

You can see pictures of Haigh which are provided by:

"HAIGH is a township two miles north of Wigan, in that parish, and is one of the most interesting townships therein. Great quantities of cannel coal (mentioned above) is found here, and at Haigh-hall, the beautiful seat of the Earl of Balcarres & Baron Wigan, a summer house is made of it, said to have stood more than a hundred years, and in which ladies may seat themselves without danger to the purity of their most delicate vestures. Various toys are made from cannel, and when formed into boxes, plates, &c. it is susceptible of a polish as fine as black marble. This township contained, by the its census, 1,300 inhabitants."

"HAIGH, a township and ecclesiastical district in the parish of Wigan, hundred of West Derby, county Lancaster, 2 miles N.E. of Wigan, its post town and railway station, and 17 N.W. of Manchester. It is situated near the river Douglas and the Leeds and Liverpool canal. The soil is clayey, and the land chiefly arable. The inhabitants are chiefly employed in the iron works and coal-mines, the latter producing the celebrated Cannel coal. There are also several cotton factories. This lace was for many generations the property of the ancient knightly family of the Bradshaighs of Haigh Hall. The living is a perpetual curacy in the diocese of Chester, value £150, in the patronage of the Rector of Wigan. The church is a plain stone edifice, dedicated to St. David, with a campanile turret containing a clock and one bell. The charities produce £194 per annum, of which £55 goes towards the support of Turner's school, and £137 for Lady Bradshaigh's almshouses. There is a chapel for Roman Catholics, and a National school for both sexes, also a Sunday-school. Haigh Hall, the magnificent seat of the Earl of Crawford, was built in the reign of Edward II. It stands in the midst of a well-wooded park, in which is situated a summerhouse built of Cannel coal, beautifully polished. The Earl of Crawford is lord of the manor."

In 1835 Haigh was a township in the parish of Wigan.

You can see the administrative areas in which Haigh has been placed at times in the past. Select one to see a link to a map of that particular area. 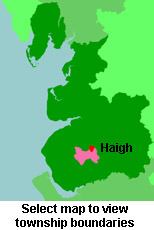 View maps of Haigh and places within its boundaries.