Details about the census records, and indexes for Halewood.

The Register Office covering the Halewood area is Knowsley.

"HALEWOOD, a township in the parish of Childwall, hundred of West Derby, county Lancaster, 5 miles S. of Prescot, its post town. It is situated near the river Mersey, and the Manchester and Garston section of the London and North-Western railway has a station in the village. The tithes have been commuted for a rent-charge of £394 18s. 8d. The village is considerable. The living is a perpetual curacy in the diocese of Chester, and in the patronage of the Vicar of Childwall. The church is a small ancient structure situated at Woolton."

In 1835 Halewood was a township in the parish of Childwall.

You can see the administrative areas in which Halewood has been placed at times in the past. Select one to see a link to a map of that particular area.

Some information about the history of Halewood. 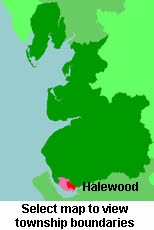 View maps of Halewood and places within its boundaries.