HALLIWELL, a village, a township, two chapelries, and a sub-district, in Deane parish, and Bolton district, Lancashire. The village stands 2 miles WNW of Bolton town and r. station; is a pleasant place; and has a postoffice under Bolton. The township comprises 2,320 acres. Real property, £23, 939; of which £320 are in mines, and £84 in quarries. Pop. in 1851, 1,959; in 1861, 1,953. Houses, 1,132. The increase of pop. arose from the erection of cotton mills. The property is much subdivided. The manor belonged formerly to the Radcliffes, the Bartons, the Fauconbergs, and the Byroms; and belongs now to the Ainsworths. Smithill's hall is the seat of Peter Ainsworth, Esq.; stands beside a lovely glen; and has, near the dining room, a natural discoloration resembling a human footprint, fabled to have been impressed, in 1555, by George Marsh, the martyr. The township is named from an ancient holy well; it has fine views; and it contains great bleach works and fourteen large cotton mills. The two chapelries are St. Paul and St. Peter; the former constituted in 1848, the latter in 1840, and both made ecclesiastically parochial in 1860. Pop. in 1861, 2,712 and 3,241. Houses, 527 and 605. Pop. of St. Peter in 1865, , 350. The livings are vicarages in the diocese of Manchester. Value, £180 and £200. Patron of St. Paul, R. H. Ainsworth, Esq.; of St. Peter, Trustees. The church of St. Paul was built in 1848; and that of St. Peter was built in 1838, rebuilt in 1844, is in the early English style, and has a tower. There are a donative chapel connected with Smithill's hall, three Wesleyan chapels, three working men's institutes, national schools, and a structure called the DeaneMill school, built at a cost of upwards of £1,000, and including free school, lecture room, and library. The subdistrict includes also the township of Heaton. Acres, 3,950. Pop., 6,908. Houses, 1,312.

Details about the census records, and indexes for Halliwell.

The Register Office covering the Halliwell area is Bolton.

You can see pictures of Halliwell which are provided by:

"HALLIWELL, a township in the parish of Deane, hundred of Salford, county Lancaster, 2 miles N.W. of Bolton, its post town. The village is of considerable extent, and the inhabitants are chiefly employed in the cotton mills and bleach works. In the vicinity is Smithill Hall, an ancient mansion, recently repaired at a great expense. The living is a perpetual curacy in the diocese of Manchester, value £170, in the patronage of trustees. The church, dedicated to St. Peter, is a modern erection, with tower containing eight bells. In the interior are three stained-glass windows. The church was erected at the sole expense of J. H. Ainsworth, Esq., who has also erected another church in the village. The Wesleyans have a place of worship, and there are National and British schools. The latter is a handsome building, erected at the cost of £3,000 by Messrs. Gardner and Bayle. It contains a lecture-room and library. J. H. Ainsworth, Esq., is lord of the manor."

In 1835 Halliwell was a township in the parish of Deane.

You can see the administrative areas in which Halliwell has been placed at times in the past. Select one to see a link to a map of that particular area. 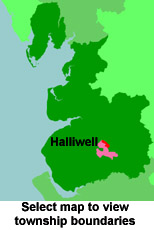 View maps of Halliwell and places within its boundaries.