HALSALL, a village, a township, a parish, and a subdistrict, in Ormskirk district, Lancashire. The village stands near the Leeds and Liverpool canal, 3 miles NW of Ormskirk r. station; is a scattered place; and has a post office under Ormskirk. The township includes also the hamlets of Barton and Haskeyne. Acres, 6, 996. Real property, £10,661. Pop., 1,204. Houses, 196. The parish contains likewise the townships of DownHolland and Melling, and the chapelries of Maghull and Lydiate. Acres, 1,658. Real property, £36,268. Pop. in 1851, 1, 510; in 1861, 1, 672. Houses, 803. The property is much subdivided. The manor belongs to Lady Scarisbrick. Good building stone is found; and a kind of moss exists which has been used for candles. The living is a rectory in the diocese of Chester. Value, £3,500.* Patron, H. H. Blundell, Esq. The church consists of nave, three aisles, and chancel, with tower and spire; contains a piscina, an effigies of a priest, and several mural monuments; and is in good condition. The p. curacies of Maghull, Melling, and Lydiate, are separate benefices. There are a national school for girls, an endowed school for boys, with £26, and other charities with £200. The sub-district comprises Halsall and Down Holland Townships. Acres, 10,470. Pop., 952. Houses, 329.

Details about the census records, and indexes for Halsall.

The Register Office covering the Halsall area is West Lancashire

You can see pictures of Halsall which are provided by:

"HALSALL, a parish in the hundred of West Derby, county Lancaster, 3 miles W. of Ormskirk, its post town. It is situated near the coast, on the Leeds and Liverpool canal, and contains the townships of Halsall, Down Hotland, Lydiate, Maghull, and Melling. The soil is of a loamy nature, and the land chiefly arable. In Halsall Moss is a large quantity of "lit-turf," which is used in the manufacture of candles. There are some quarries of good building-stone. The inhabitants are chiefly engaged in agriculture. The living is a rectory in the diocese of Chester, value £3,500. The church, dedicated to St. Cuthbert, is a handsome structure, with tower surmounted by a spire containing a clock and six bells. In the interior are several mural monuments and a recumbent effigy of a priest. In addition to the parish church, there are three district churches at Maghull, Melling, and Lydiate, the livings of which are perpetual curacies, varying in value from £155 to £73'. The parochial charities produce £226, £26 of which goes to Halsall's free grammar school for boys. There is a National school for girls. Charles Scarisbrick, Esq., is lord of the manor and principal landowner. Halsall Hall is the principal residence."

In 1835 the parish of Halsall contained the townships of Halsall, Downholland, Lydiate, Maghull and Melling.

You can see the administrative areas in which Halsall has been placed at times in the past. Select one to see a link to a map of that particular area. 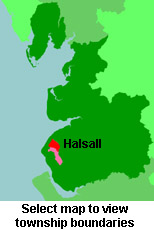 View maps of Halsall and places within its boundaries.