Details about the census records, and indexes for Haslingden.

The Register Office covering the Haslingden area is Hyndburn and Rossendale.

You can see pictures of Haslingden which are provided by:

"ROSE-BANK, a hamlet in the parish of Whalley, county Lancaster, 2 miles S. of Haslingden, and 14 N.W. of Manchester. It is situated in the valley of the river Irwell, near Edenfield, and on the borders of Rosendale Forest. There are extensive print works."

"HELMSHORE, a hamlet in the parish of Whalley, county Lancaster, 12 miles N.W. of Manchester. It is a station on the Manchester branch of the West Lancashire and Yorkshire railway, and is situated near Rossendale Forest and the river Irwell."

Haslingden Roots are a voluntary group of individuals who set up to help people research their family history of the area.

In 1835 Haslingden was a chapelry and township in the parish of Whalley.

You can see the administrative areas in which Haslingden has been placed at times in the past. Select one to see a link to a map of that particular area. 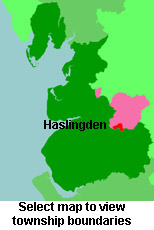 View maps of Haslingden and places within its boundaries.

The Workhouse site has an interesting description of Haslingden workhouse.