HESKETH, a village and a parish in Ormskirk district, Lancashire. The village stands on the coast of the Ribble estuary, near the influx of the Douglas river, 4 miles NW of Croston r. station, and 8 SW of Preston. The parish contains also the seaport village of Hesketh Bank, and the village of Becconsall. Post town. Croston, under Preston. Acres, 4,735; of which 1,685 are water. Real property, £4,499. Pop. in 1851, 692; in 1861, 804. Houses, 153. The increase of pop. arose from the erection of cottages, and from the presence of labourers in reclaiming marsh land. The property is divided among a few. The manor belongs to Sir Thomas G. Hesketh, Bart. A large tract, between Hesketh and Cockerham, was overwhelmed by the sea in 1720. The Ribble estuary here was once 2½ miles wide, and fordable at low water; but during the five years ending in 1865, a vast tract of valuable marsh land was reclaimed from it by deepening and narrowing the river's bed, and by forming an embankment several miles long. The living is a rectory, united with the p. curacy of Becconsall, in the diocese of Manchester. Value, £300. Patron, Sir T. G. Hesketh, Bart. The church is a brick edifice, and consists of nave, aisle, and chancel. There is a Primitive Methodist chapel.

Details about the census records, and indexes for Hesketh with Becconsall.

You can see pictures of Hesketh with Becconsall which are provided by:

"HESKETH, a parish in the hundred of Leyland, county Lancaster, 9 miles N.E. of Ormskirk. It is joined with Becconsall, and includes the port of Hesketh Bank, being a subport to Preston. The village is situated near the junction of the rivers Douglas and Ribble. In 1720 the sea broke in between Hesketh and Cockerham, overwhelming a large tract of land. The living is a rectory in the diocese of Manchester, value £275. The charities consist of a share of those belonging to Croxton."

BECCONSALL, a hamlet united with the parish of Hesketh, in the hundred of Leyland, in the county palatine of Lancashire, 4 miles to the S.W. of Preston."

You can see the administrative areas in which Hesketh with Becconsall has been placed at times in the past. Select one to see a link to a map of that particular area. 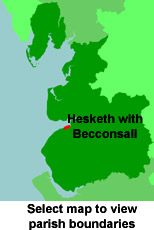 View maps of Hesketh with Becconsall and places within its boundaries.