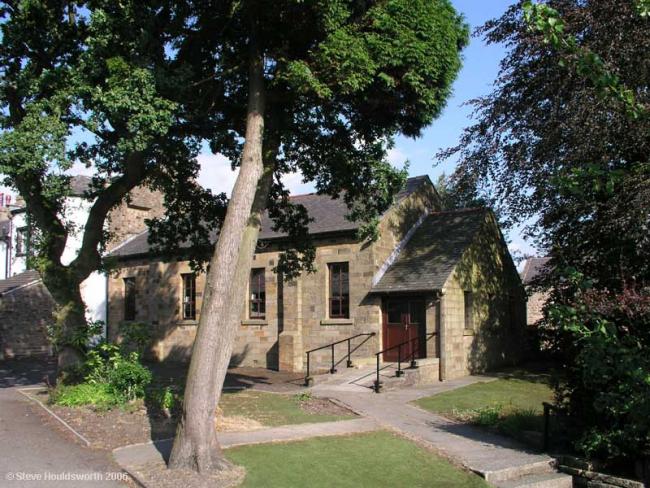 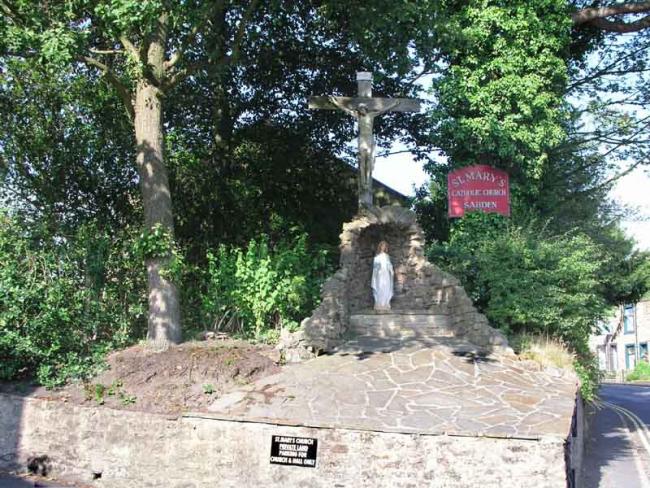 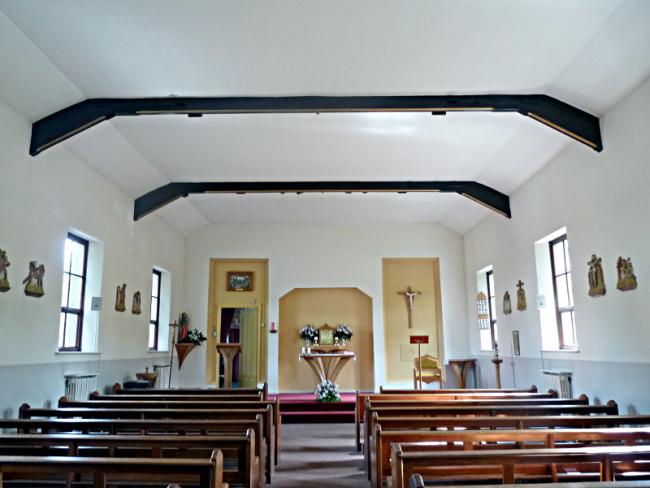 This parish began by being an out-station of Clitheroe, St. Michael's, where the baptismal register has an entry of the baptism of a John Noble of Sabden dated 1798. The present village of Sabden is not much older than that. It was formerly called Hey-houses. In the 1790's two brothers from Burnley, named Berry, set up a weaving and dyeing works on the brook which runs through this valley. The stream is still called Sabden brook and this name was taken by the new village.

The tradition here is that the Catholics of Sabden would set off on Sunday mornings to climb over Pendle Hill, carrying their food for the day. The track was a very rough affair in those days through the Nick o' Pendle; it entailed a steep climb up and down of nearly 5 miles. One woman remembers her brother catching a young rabbit on the way over, which he took with him to Mass. It caused a sensation when it escaped there-and he began crawling after it through the people.

Sabden owes its own start as a Catholic parish to the Trappes family of Clayton-le-Moors. During the 1870's the Squire formed the habit of riding on horse-back to Clitheroe for Sunday Mass, and he seems to have preferred coming the long way round through Sabden valley and over Pendle Hill, about 10 or 12 miles. On these journeys he was witness of the fidelity and the hardships of the poor Sabden Catholics and of his charity he gave a large sum to Fr. Lea, S.J., of St. Michael's, to build them a church. Later on a bazaar was organised in Clitheroe for the same purpose and with this money Fr. Lea bought from the Fort estate a piece of ground in Sabden, upon which he built the present school and the 3 adjoining houses.

The Sabden Catholic School opened in 1877 in the summer, and the famous Teresa Higginson came as teacher. Only 11 pupils numbered for the opening, and when Teresa left Sabden finally three years later the total was only 22 and included several half-timers. No doubt as soon as the school building could be used Mass was said. I have met one man who remembers coming from his home in Clitheroe for the first Mass. However, Clitheroe, from 1877 up to 1909, when Sabden came to the diocese, could only provide Sabden with a Mass on the first Sunday of each month. On other Sundays the Catholics of Sabden had to climb over Pendle to get to Mass.

It was not until 1909 that Clitheroe was relieved of the burden. When the Rev. John Meade was named the first parish priest of Sabden, it took him two years to find a house there-and he worked his parish from Whalley. In 1911 he was able to get one of the school houses, and there he resided until 1919. Bishop Casartelli at his visitation gave Fr. Meade a commission to find a suitable house as a presbytery in Sabden and so Bank House was bought for £526 (at diocesan expense) providing a fair-sized and well-built home for a priest and sufficient ground for a church. Bank House has one very large room on the ground floor and Fr. Meade turned this into a chapel and ceased using the school for church purposes. His pastorate ended with his death in January 1933, aged 65, and the Rev. Thomas Murray was his successor. The big room in Bank House was too small for the number of Catholics and Fr. Murray set about getting a building fund-meanwhile he was forced to return to the use of the school for the Sunday services. By 1937 that fund stood at £650 and with this he approached the late Mr. Daniel Durkin, builder and contractor of Trafalgar Street, Burnley, to whom much more than to anyone else is due the credit for the completion of the present St. Mary's Church. The plans were drawn by young Mr. Dennis Durkin. All the stone required was obtained at a nominal price from the staircases of a huge cotton mill that had been erected in 1837-exactly a century before-at Lowerhouse, and was then in course of being demolished. Mr. Durkin completed the church for the extraordinarily modest price of£ 800. The wooden altar and oak altar rails were given by Fr. Hubert Baron from St. John the Baptist's at Padiham.

This parish has a fine oil painting of St. Jerome which the Jesuits brought to Sabden and which used to hang on the school walls. It may have been one of the art treasures they brought with them from France to Stonyhurst in 1790.