Heysham, par. and vil., N. Lancashire, on Morecambe Bay, 5 miles SW. of Lancaster, 1774 ac., pop. 632; P.O.; in vicinity are the seats of Heysham Hall, Heysham Lodge, and Heysham Tower; at High Heysham are remains of an ancient chapel, the property of the Stanleys.

Details about the census records, and indexes for Heysham.

The Register Office covering the Heysham area is Lancaster.

You can see pictures of Heysham which are provided by:

"HEYSHAM, a parish in the hundred of Lonsdale South of the Sands, county Lancaster, 5 miles W. of Lancaster, its post town, and 3 S.W. of Poulton-le-Sands. The village, which is small, is situated on the coast between Lancaster and Morecambe bays, and is a favourite watering place during the summer season. The land is nearly evenly divided between arable and pasture, with about 170 acres of moss. The tithes have been commuted for a rent-charge of £470. The living is a rectory in the diocese of Manchester, value £504. The church is situated on a rock, and is dedicated to St. Peter. It is an ancient stone structure with an open turret containing two bells. There is an endowed school for the free education of eight boys and a similar number of girls. The Wesleyans have a place of worship. Near to the church are the ruins of a small oratory or chapel, and several excavations in the rocks resembling the shape of coffins."

You can see the administrative areas in which Heysham has been placed at times in the past. Select one to see a link to a map of that particular area. 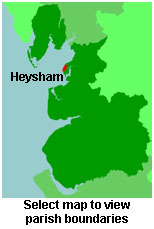 View maps of Heysham and places within its boundaries.