HOGHTON, a village, a township, and a chapelry, in Leyland parish, Lancashire. The village stands on the river Darwen, adjacent to the East Lancashire railway, 5 miles W by S of Blackburn; and has a station on the railway, and a post office under Preston. The township comprises 2,227 acres. Real property, £4,928; of which £200 are in quarries. Pop. in 1851, 1,373; in 1861, 1,201. Houses, 249. The decrease of pop. was caused by the removal of families to manufacturing towns. The manor belongs to Sir Henry de Hoghton, Bart.; and has belonged to his family since the time of Stephen. Hoghton Tower was once the seat of the Hoghton family; stands on a rock, commanding a magnificent view; consists of two courts, with three square towers, all now in a ruinous condition; was garrisoned during the civil wars of Charles I., and partly blown up accidentally, but afterwards repaired; and is now in the keeping of a custodian. James I. was entertained here during three days of 1617; issued then the order for the "Book of Sports" and is said to have been so much pleased with a fine loin of beef, served up to table, that he knighted it as "Sir Loin", and thus gave rise to the name by which the joint has ever since been called. Alum mines were then in operation, near the foot of the hill; and they continued, many years afterwards, to be productive; but they have gone into disuse. There are now, in the township, two small cotton manufactories. The chapelry was constituted in 1842, and is less extensive than the township. Pop., 1,100. Houses, 231. The living is a vicarage in the diocese of Manchester. Value, about £150. * Patron, the Vicar of Leyland. The church was built in 1833; it presents no architectural features. There are a Wesleyan chapel and a school, the latter unendowed, but supported by Sir H. de Hoghton.

Details about the census records, and indexes for Hoghton.

The Register Office covering the Hoghton area is Chorley.

You can see pictures of Hoghton which are provided by:

"HOGHTON, a chapelry in the parish and hundred of Leyland, county Lancaster, 6 miles E. of Preston, its post town, 4 S.W. of Blackburn, and 6 N. of Chorley. It is a station on the East Lancashire railway. The village, which is considerable, is situated on the W. bank of the river Darwin, a feeder of the Dove, and near the Blackburn canal. On a lofty ridge of hills are the ruined gateway, &c., of the old tower of the Hoghtons, now a farmhouse. During the civil war of the 17th century, part of this massive pile was accidentally blown up by the garrison. Stone is quarried here. A large portion of the inhabitants are employed in handloom-weaving. The soil consists chiefly of clay and sand, on a substratum of limestone. Two-thirds of the land is in meadow and pasture. The living is a perpetual curacy in the diocese of Manchester, value £150. The church, dedicated to the Holy Trinity, is a stone structure erected by a grant of the Parliamentary Commissioners in 1833. There is a National school for both sexes, endowed by the late Sir Charles Hoghton with £26 per annum; also a place of worship for Wesleyans. Sir Henry Hoghton, Bart., is lord of the manor and principal landowner."

In 1835 Hoghton was a township in the parish of Leyland.

You can see the administrative areas in which Hoghton has been placed at times in the past. Select one to see a link to a map of that particular area. 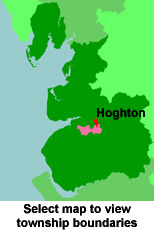 View maps of Hoghton and places within its boundaries.