HORNBY, a village, a township, and a chapelry, in Melling parish, Lancashire. The village stands at the confluence of the Wenning and the Lune rivers, adjacent to the Little Northwestern railway, 8½ miles NE by E of Lancaster; is neatly built; commands beautiful scenery along the valleys; is sometimes visited by tourists; has a station on the railway, a post office under Lancaster, and an inn; is a seat of petty sessions; was formerly a market town; and has still cattle fairs on every alternate Tuesday of the summer months. The township comprises 2,115 acres. Real property, £4,066. Pop., 317. Houses, 75. The manor belonged, in the 12th century, to Nicholas de Montbegon; passed to the Stanleys, Lords Monteagle; and belongs now to John Foster, Esq. Hornby Castle, the manorial seat, was founded by N. de Montbegon; retains two towers built by one of the Lords Monteagle and by Lord Wemyss; has undergone recent extensive renovations and improvements; and stands on an eminence, overlooking the rich surrounding scenery. The estate was the subject of a famous litigation, called "the Great Will Cause, " begun in 1826. Hornby Hall is the seat of John Murray, Esq. A Roman mound is near the Lune. A Premonstratensian priory, a cell to Croxton abbey, was anciently here; and was given, at the dissolution, to the Stanleys; and the remains of it are now a farm-house. The chapelry was constituted a parish in 1859, and is larger than the township. Pop., 455. Houses, 98. The living is a p. curacy in the diocese of Manchester. Value, £130. * Patron, John Foster, Esq. The church is ancient; has a chancel, and an octagonal tower, built by the first Lord Monteagle, after the battle of Flodden; and contains a tablet to Dr. Lingard, the historian. The shaft of an ancient cross is in the churchyard. A small Roman Catholic chapel, to the W of the church, was served by Dr. Lingard.

Details about the census records, and indexes for Hornby.

The Register Office covering the Hornby area is Lancaster.

You can see pictures of Hornby which are provided by:

"HORNBY, a township and chapelry in the parish of Melling, hundred of Lonsdale South of the Sands, county Lancaster, 9 miles N.E. of Lancaster, its post town. It is a station on the North-Western railway. The parish, which is wholly agricultural, is situated at the bridge on the rivers Lune and Welling. It was formerly a market town, and had a Premonstratensian priory founded as a cell to Croxton Abbey. At the Dissolution the site was given to Lord Monteagle, of Hornby Castle. Petty sessions are held at the Castle Inn every alternate Tuesday. The living is a perpetual curacy in the diocese of Manchester, value £92. The church, dedicated to St. Margaret, is an ancient structure with an octagonal tower containing six bells. The interior of the church contains a tablet to Dr. Lingard, the historian. Hornby Castle is the principal residence. It was formerly the seat of the Marsden, but is now the seat of Pudsey Dawson, Esq., who is lord of the manor. The parochial charities produce about £14 per annum. Here is a Church school for both sexes, supported by Pudsey Dawson, Esq. A market for cattle is held every alternate Tuesday."

In 1835 Hornby was a township in the parish of Melling.

You can see the administrative areas in which Hornby has been placed at times in the past. Select one to see a link to a map of that particular area. 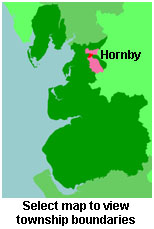 View maps of Hornby and places within its boundaries.

The Workhouse site has an interesting description of Lunesdale workhouse.