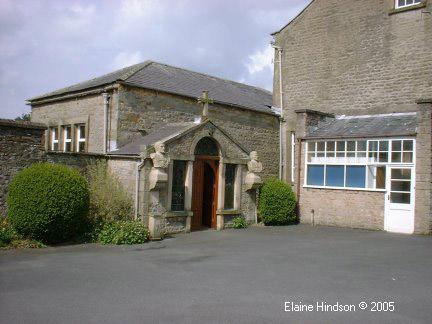 The Church in the picture was built in 1820 and paid for partly out of the profits Dr John Lingards History of England. Dr Lingard was the priest in charge of Hornby at the time. Before that the chapel was at Robert Hall.

The story of St. Mary's Roman Catholic Church is of special interest. Anne Winder Dowbiggin, spinster, of Winder, in 1717 as a 'Papist' registered her house at Hornby called Bell House, worth £9 a year. She married Thomas Benison of Scambler, and the house, rebuilt and called Hornby Hall, descended to her daughter Anne, who married John Fenwick of Burrow, as is related in the account of that township. About 1750 she proposed to Bishop Petre that the remains of the Morley Trust might be applied to the maintenance of a chapel at Hornby, she adding what was necessary. The result of the evil conduct of her husband's heir was that she retained Hornby Hall for life only, and therefore she built a chapel at Claughton. Before her death in 1777 she gave instructions for the endowment of the Hornby mission and the purchase of land adjoining her house.

One of the priests in charge was Dr. John Lingard, whose tenure has made the place famous. He was born at Winchester in 1771 and educated at Douay. Driven out by the French Revolution, he took part in the work of the reconstituted college at Crook and Ushaw. In September 1811 he took charge of the Hornby mission, and retained it till his death on 17 July 1851. It was here that he wrote his History of England, the first volume of which appeared in 1819 and the last in 1830. He revised it three times, and the fifth edition was completed in the year of his death. He pulled down the Claughton Chapel and used the materials in building the existing small chapel at Hornby in 1820. He provided also some endowment.

Victoria County History. A History of the County of Lancaster: Volume 8