HULME, a township, eight parochial chapelries, and a sub-district, in Manchester parish and Chorlton district, Lancashire. The township lies on the river Irwell and on the Manchester and Altrincham railway, at the termination of the Bridgewater canal, 1¼ mile SW of the centre of Manchester; and is all within Manchester borough, and under the Manchester police. Acres, 440. Real property, £240,913; of which £77,916 are in the canal. Pop. in 1851, 53,482; in 1861, 68,433. Houses, 13,487. The increase of pop. arose from participation in the prosperity and extension of Manchester.

Details about the census records, and indexes for Hulme.

The Register Office covering the Hulme area is Manchester.

You can see pictures of Hulme which are provided by:

"HULME, a township in the parish and borough of Manchester, county Lancaster, 3 miles S.E. of Manchester, of which it is a populous suburb. It is situated on the further side of the river Medlock, which separates it from Manchester. The greater part of the township is now covered with buildings. It contains numerous cotton and other factories, the workhouse for Chorlton Union, and cavalry barracks. The inhabitants are chiefly engaged in the manufactures carried on at Manchester. The living of St. George is a rectory in the diocese of Manchester, value £350, in the patronage of the dean and chapter. There are two other churches, one dedicated to the Holy Trinity, and the other to St. Mark, besides chapels belonging to most of the Protestant Dissenters."

In 1835 Hulme was a township in the parish of Manchester.

You can see the administrative areas in which Hulme has been placed at times in the past. Select one to see a link to a map of that particular area. 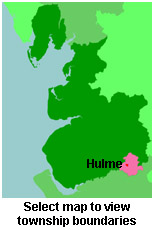 View maps of Hulme and places within its boundaries.