INCE-BLUNDELL, a village and a township in Sefton parish, Lancashire. The village stands near the river Alt and the Liverpool and Southport railway, 9 miles NNW of Liverpool; and has a very ancient cross, and a Roman Catholic chapel. The township comprises 2,258 acres. Real property, £5,022. Pop., 572. Houses, 91. Most of the land belongs to Thomas W. Blundell, Esq., and part to the Earl of Sefton. InceBlundell Hall, the seat of Mr. Blundell, is a splendid mansion, in a beautiful park; and has attached to it a building modelled exactly after the Pantheon at Rome, but one-third less in size, and containing a rich collection of statuary, paintings, sarcophagi, vases, bronzes, and other objects of interest.

Details about the census records, and indexes for Ince Blundell.

You can see pictures of Ince Blundell which are provided by:

"INCE-BLUNDELL, a township in the parish of Sefton, hundred of West Derby, county Lancaster, 9 miles N. of Liverpool, and 7 S.W. of Ormskirk. It is situated on the river Alt, near the coast. It has been the seat of the Blundells from the reign of Henry IIL, from which it takes its suffix. The land is divided between arable, meadow, and woodland. In the village is a stone cross of a very ancient date. There is a Roman Catholic chapel and day schools. Ince-Blundell Hall, the seat of the Blundell family, is situated in the midst of a wooded park. Close to it is the Pantheon, two-thirds the size of that of Rome, and containing upwards of 500 pieces of sculpture and 200 paintings, some of them by the most celebrated masters, including Raphael's "Fall of Man" and Canova's "Psyche.""

In 1835 Ince Blundell was a township in the parish of Sefton.

You can see the administrative areas in which Ince Blundell has been placed at times in the past. Select one to see a link to a map of that particular area. 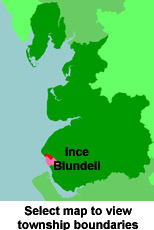 View maps of Ince Blundell and places within its boundaries.