"INCE-IN-MAKERFIELD, a township and a chapelry in Wigan parish, Lancashire. The township lies on the Leeds and Liverpool canal, the Lancashire and Yorkshire railway, and the London and Northwestern railway, 1¼ mile SW of Wigan; and has a station on the L. and Y. railway, and a post office under Wigan, both of the name of Ince. Acres, 2,314. Real property, £69,829; of which £56,920 are in mines, and £30 in the canal. Pop. in 1851, 3,670; in 1861, 8,266. Houses, 1,533. The increase of pop. arose mainly from the extension of mining and manufacturing operations. A fine cannel coal is found; an excellent common coal is very largely worked; and there are extensive iron works, some cotton mills, and chemical works. Ince Hall, formerly the seat of the Gerard family, is a curious, half timbered, ancient structure. The cemetery of Ince, comprising 4 acres, and a cemetery of Wigan, comprising 18 acres, are within the township. The chapelry is nearly conterminate with the township, and was constituted in 1862. The living is a vicarage in the diocese of Chester. Value, £300. Patrons, Simeon's Trustees. The church was built in 1864, at a cost of £6,000. There are three national schools; two of them built in 1866."

Details about the census records, and indexes for Ince in Makerfield.

The Register Office covering the Ince in Makerfield area is Wigan and Leigh.

You can see pictures of Ince in Makerfield which are provided by:

INCE is a township in the parish of Wigan, adjoining to that town upon the east. The manor of Ince anciently belonged to a family of that name, and came into the possession of the Gerards as early as 1259. The present owner of the manor house is Capt. John Walmsley, of Bath, whose father purchased it from a descendant of the Gerards. In 1821 the township of Ince contained nearly 1,400 inhabitants.

"INCE-IN-MAKERFIELD, a township in the parish of Wigan, hundred of West Derby, county Lancaster, adjoining the borough of Wigan. It is a station on the Lancashire and Yorkshire, and is crossed by the London and North-Western railway. The Leeds and Liverpool canal runs through the township. It is celebrated for a species of coal called "cannel," which is found here in large quantities, and the works of which employ a large number of the inhabitants. There are extensive iron and chemical works, and cotton mills, in which a great number of hands are engaged. The principal residence is Ince Hall, formerly the seat of the Gerard family. There are two cemeteries at Ince, one for its own use, and the other belonging to the town of Wigan, situated on either side of the London and North-Western railway. There is a National school."

In 1835 Ince in Makerfield was a township in the parish of Wigan.

You can see the administrative areas in which Ince in Makerfield has been placed at times in the past. Select one to see a link to a map of that particular area. 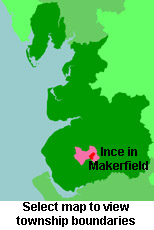 View maps of Ince in Makerfield and places within its boundaries.