"INSKIP, a township and a chapelry in St. Michael-on-Wyre parish, Lancashire. The township bears the name of Inskip-with-Sowerby; lies 4 miles WSW of Brock r. station, and 9 NW of Preston; and has a postal letter box under Preston. Acres, 2,888. Real property, £3,748. Pop., 663. Houses, 129. The manor belongs to the Earl of Derby. The chapelry is larger than the township, and was constituted in 1850. Pop., 780. Houses, 158. The living is a p. curacy in the diocese of Manchester. Value, £105. * Patron, the Vicar of St. Michael-on-Wyre. The church is a neat edifice, of nave and chancel, with a belfry. There are a Baptist chapel, a national school, and some small charities."

Details about the census records, and indexes for Inskip.

You can also perform a more selective search for churches in the Inskip area or see them printed on a map.

The Register Office covering the Inskip area is Lancaster.

You can see pictures of Inskip which are provided by:

Ask for a calculation of the distance from Inskip to another place.

The is a one-name study being undertaken for those with a surname of Inskip.

In 1835 Inskip with Sowerby was a township in the parish of St. Michaels.

You can see the administrative areas in which Inskip has been placed at times in the past. Select one to see a link to a map of that particular area. 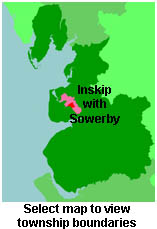 View maps of Inskip and places within its boundaries.