KIRKBY, a township-chapelry in Walton-on-the-Hill parish, Lancashire; on the Liverpool and Bury railway, 7½ miles NNE of Liverpool. It has a station with telegraph on the railway, and a post office under Prescot. Acres, 3,920. Real property, £7,421. Pop., 1,415. Houses, 245. The manor, with most of the land, belongs to the Earl of Sefton; and has belonged to his family since the time of William II. An extensive tract, called Kirkby Moss, lies in the E, and extends beyond the chapelry toward Windle. The living is a p. curacy in the diocese of Chester. Value, £250.* Patron, the Earl of Sefton. The church was rebuilt in 1766, and contains a Norman font. There are a national school, and charities £13.

Details about the census records, and indexes for Kirkby.

The Register Office covering the Kirkby area is Knowsley.

You can see pictures of Kirkby which are provided by:

"KIRKBY, a chapelry in the parish of Walton-on-the-Hill, hundred of West Derby, county Lancaster, 8 miles N. of Liverpool, and 6 N.W. of Prescot. It is a station on the Liverpool and Bury railway. The village, which is considerable, is situated near Kirkby Moss. The living is a perpetual curacy annexed to the rectory's of Walton-on-the-Hill, in the diocese of Chester. The church, dedicated to St. Chad, contains an ancient font of the time of William II. The charities produce about £13 per annum, £8 of which goes to the support of a school. The Earl of Sefton is lord of the manor, whose family have held it since the reign of William II."

In 1835 Kirkby was a township in the parish of Walton on the Hill.

You can see the administrative areas in which Kirkby has been placed at times in the past. Select one to see a link to a map of that particular area.

Some information about the history of Kirkby. 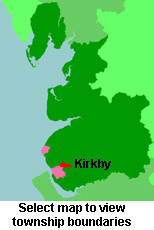 View maps of Kirkby and places within its boundaries.