"HERDHOUSE, an extra parochial place in the parish of Kirkby Ireleth, county Lancaster, 2 miles from Broughton." 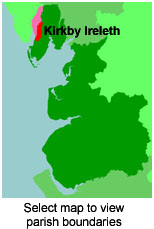