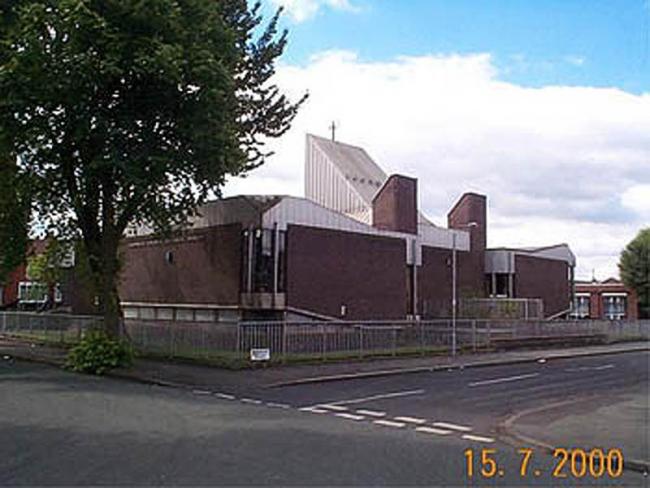 In 1915, Father (now Canon) Chronnell was asked by the Bishop to start a new parish betwen the parishes of St. Joseph, Longsight, and St. Mary's, Levenshulme. He had no house, no place to say Mass in, no means at his disposal. He secured the use of the Co-operative Hall behind the Stores at the corner of Mayfield Road and Stockport Road. And there on Sunday, August 22, 1915, the first Mass was said and the new Parish formally opened by Dr. Casartelli, accompanied by the Lord Mayor of Manchester, the Rt. Hon. Sir Daniel McCabe. Appeals were made in different churches of the diocese to help the new young parish. Numerous other gifts were made by many different benefactors, chief among whom was Lady Annette de Trafford.

A plot of land was secured very soon from Pemberton's Estate, the very plot on which St. Richard's Church stands today. But to build a church or school at that time was apparently impossible. Hence a temporary building was secured in the Crescent, off Stockport Road, and a house nearby to serve as the priest's residence. This building served as St. Robert's Church from October 1915, till April 1929.

A new plot of land was bought in Hamilton Road in 1921, by Father Watts (who had succeeded Fr. Chronnell in January 1918). All manner of difficulties presented themselves, however, to hinder the building of a church and schools, and right up to 1930, the children of the parish were still attending other schools in the surrounding district. But in 1929, parishioners were gratified on Sunday, April 21, to assist at the solemn opening of St. Robert's Church in Hamilton Road. This had been effected under Fr. G. T. Griffin (who had succeeded Fr. Watts in 1927); and very soon after­wards, permission to build a parochial school was wrested from the Local Authority after a long and bitter struggle.

The foundation stone of the new school of St. Robert was laid by Bishop Henshaw on March 29, 1930, and the school was blessed and opened on August 24, by the same Bishop in the same year. From that time onwards, St. Robert's parish grew and in­creased in every way; in other words the fruits of the long years of working and hoping were at last being garnered.

In 1929, a house had also been bought at 149 Hamilton Road, (almost opposite the new church) to serve as a presbytery. It is still serving that purpose very well.

In January 1934, Fr. G. T. Griffin was succeeded as parish priest by Fr. J. J. Ingram, M.A. Not long after his coming to the parish, it was proposed by the Bishop (Dr. T. Henshaw) that the part of the parish lying to the east of Stockport Road should be cut off and made into a separate parish. After a great deal of discussion and consideration, however, it was decided to build a chapel-of-ease of such a design that it could also be used as a school hall in the senior school which might have to be built later under the new Education Act of 1936. Meantime, the establishment of a new parish could be left in abeyance. In 1936, therefore, St. Richard's chapel-of-ease came into existence and was solemnly opened by Bishop Henshaw on December 20, 1936.

In October 1939, Fr. J. J. Ingram, M.A. was succeeded as parish priest by Fr. V. O'Shaughnessy, M.C. On his arrival, he found that the school was standing silent and empty; all the children had been evacuated for safety, to Cheadle, Staffs. Also 200 men of the parish had been mobilised for the Services. Yet the people strove manfully to carry on the life of the parish; they increased in numbers, they attended the services in church well, and steadily reduced the debt still on St. Robert's Church and School, so that in September 1944, St. Robert's parish, started in such difficult circumstances 29 years previously, was now com­pletely free from debt.