KNOWSLEY, a township-chapelry in Huyton parish, Lancashire; 2½ miles N by W of Huyton r. station, and 3 NW by W of Prescot. Post town, Prescot. Acres, 4, 750. Real property, £12,549; of which £1,367 are in mines, and £330 in quarries. Pop. in 1851, 1,486; in 1861, 1,349. Houses, 243. The property all belongs to the Earl of Derby. Knowsley Hall is the Earl's seat; has been enlarged from time to time: includes portions of the period of Henry VII.; was fully restored, by the tenth earl, before 1735; presents imposing fronts, surmounted by round towers; contains portraits of all the Stanleys, and a large and valuable collection of paintings by the old masters; and was visited, in November 1865, by the Prince and Princess of Wales. The grounds around it comprise upwards of 2,000 acres; are enclosed by a stone wall upwards of 8 feet high, pierced by thirteen entrances; and contain tasteful gardens, many ancient oaks, and ornamental waters nearly a mile long. The living is a p. curacy in the diocese of Chester. Value, £300.* Patron, the Earl of Derby. The church is recent, cruciform, and handsome; and has a W broach spire. There are national schools.

Details about the census records, and indexes for Knowsley.

The Register Office covering the Knowsley area is Knowsley.

You can see pictures of Knowsley which are provided by:

"KNOWSLEY, a township in the parish of Huyton, hundred of West Derby, county Lancaster, 3 miles N.W. of Prescot, its post town, and 22 N. of the Huyton railway station. The village is considerable. Nearly two-thirds of the parish are woodland and park ground surrounding Knowsley House, which, since the injury that Latham House sustained in the parliamentary war, has been the principal residence of the earls of Derby. The mansion is a spacious structure of stone with two circular towers, and contains a magnificent gallery of paintings by the first Italian and Flemish masters, also a fine collection of family portraits, including Thomas, the first earl, and father-in-law to Henry VII., whom he accompanied to the battle of Bosworth. It has undergone numerous additions since the visit of Henry VII. to his mother, the Countess of Derby, and was thoroughly restored in 1735 by William, the tenth earl. This noble mansion is open to visitors on certain days. The living is a perpetual curacy in the diocese of Lancaster, value £300. The church, dedicated to St. Mary, is a modern structure, with a tower crowned by a spire, and containing a clock and one bell. There are National and infant schools, wholly supported by the Earl of Derby."

In 1835 Knowsley was a township in the parish of Huyton.

You can see the administrative areas in which Knowsley has been placed at times in the past. Select one to see a link to a map of that particular area.

Some information about the history of Knowsley. 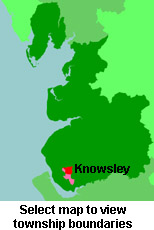 View maps of Knowsley and places within its boundaries.