Lathom, township and local government district, Ormskirk par., N. Lancashire, on river Donglas and Leeds and Liverpool Canal, 4 miles NE. of Ormskirk, 8694 ac., pop. 4161. Lathom House, seat of Lord Skelmersdale, occupies the site of the ancient house of Lathom, defended by the Countess of Derby against the Parliamentary forces.

Details about the census records, and indexes for Lathom.

The Register Office covering the Lathom area is West Lancashire.

You can see pictures of Lathom which are provided by:

"NEWBURGH, (or Newbrough), a hamlet in the parish of Ormskirk, county Lancaster, 5 miles N.E. of Ormskirk. It is situated on the river Douglas.

In 1835 Lathom was a township in the parish of Ormskirk.

You can see the administrative areas in which Lathom has been placed at times in the past. Select one to see a link to a map of that particular area. 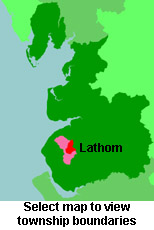 View maps of Lathom and places within its boundaries.