LEIGH, a town, a township, a parish, a sub-district, and a district, in Lancashire. The town stands on the Leigh and Wigan canal, on a loop-line of railway, from Tyldesley to Bradshaw-Leach, and near the Bolton and Kenyon branch of the Northwestern railway, 7¼ miles SW by S of Bolton; comprises portions of West Leigh, Pennington, Bedford, and Atherton townships; has undergone much improvement, under the Local Government act of 1858, and under the Public Works Manufacturing Districts act of 1863; is a seat of petty sessions and county courts, and a polling place; publishes a weekly newspaper; and has a post office under Manchester, two railway stations with telegraph, a bankingoffice, a market-place, a town hall, gas-works, three churches, four dissenting chapels, a Roman Catholic chapel, a grammar school, two national schools, a British school, a public cemetery, and charities £339. There are large cotton factories, foundries, malting establishments, two breweries, and three corn mills. Pop. of the town in 1851, 5,206; in 1861, 10,621. Houses, 2,098. Pop. in 1851, of the West Leigh portion, 838; of the Pennington portion, 4,496; of the Bedford portion, 4,885.

Details about the census records, and indexes for Leigh.

The Register Office covering the Leigh area is Wigan and Leigh.

You can see pictures of Leigh which are provided by:

In 1835 the parish of Leigh contained the townships of Atherton, Tyldesley with Shakerley, Westleigh, Pennington, Bedford and Astley.

You can see the administrative areas in which Leigh has been placed at times in the past. Select one to see a link to a map of that particular area. 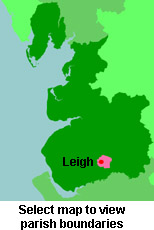 View maps of Leigh and places within its boundaries.

The Workhouse site has an interesting description of Leigh workhouse.