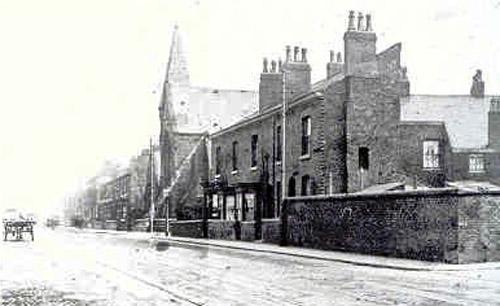 1977 booklet "Levenshulme Methodist Church" with a forward by David Smithson, Minister (printed by SAS Prit Albion House 21 Albion Street Manchester M1 5LM). This is a history of the various methodist churches in Levenshulme including Alma Park and contains photographs. Looking back at Levenshulme and Burnage (Willow Publishing, Timperley,Altrincham. 1987).

Margaret Noonan's memories of the church.

An exact location for this church was at the corner of Alma Road and Stockport Road, Levenshulme. The main entrance was on Stockport Road with another entrance gate on Alma Road. There never appeared to be any gravestones in the churchyard but I do remember the old flagstones in the yard as being very uneven. There was the main church and across the yard was the church hall where the sunday school for the young children was held in a back room. In the main room of the church hall was (what seemed to me at the time) a very large stage and I remember cupboard doors underneath it at one side. There were 2 rooms upstairs at the back of the stage (over the sunday school room) but not sure if these were ever used for anything other than to store the banners for the 'whit walks' Attached to the back of the church was a miniscule cottage comprising of a tiny kitchen and living room downstairs and just 1 room upstairs. The toilet was across the yard. The rear of the church grounds backed onto a coal yard which ran along the main Manchester - London railway line. The sunday service used to be attended by all, then after about 20 minutes of the service it was stopped, so that the children could go accross the yard for the sunday school.

John Stansfield's memories of the church.

The origin of Alma Park church began in 1857 when a Mr and Mrs Horrocks recently moved from Stockport allowed their front room in Broom Lane Levenshulme to be used for public services. An adjoining room was later constructed to accommodate the well attended services. The room eventually became too small for the growing congregation and the newly built Alma park church was opened in September 1864. My father grew up at number 14 Broom Lane which I understand was part of the house originally used for worship and which I also understand was known as "The Cottage of Content". I hope to find out more from records which may be available on the Lloyd George's Domesday Book giving details of all property in the country for valuation purposes resulting from the Finance Act 1909/10.

My other`s maternal grandparents and their family worshipped at Alma Park and I was baptised there early in WW2 by the Reverend Godfrey Vernon and my brother was baptised there in 1946 by the Reverend Handel Broadbent. I attended the Sunday School and later as a teenager the chuch occasionally being recruited to pump the organ at evening services before an electric pump was installed in 1960. During the sermon I emerged from behind a curtain and sometimes gazed at the inspirational Bible quotation set around the frieze which began "Stand fast in the faith. Quit ye like men...." (1 Corinthians 16 verse 13, Authorised Version).