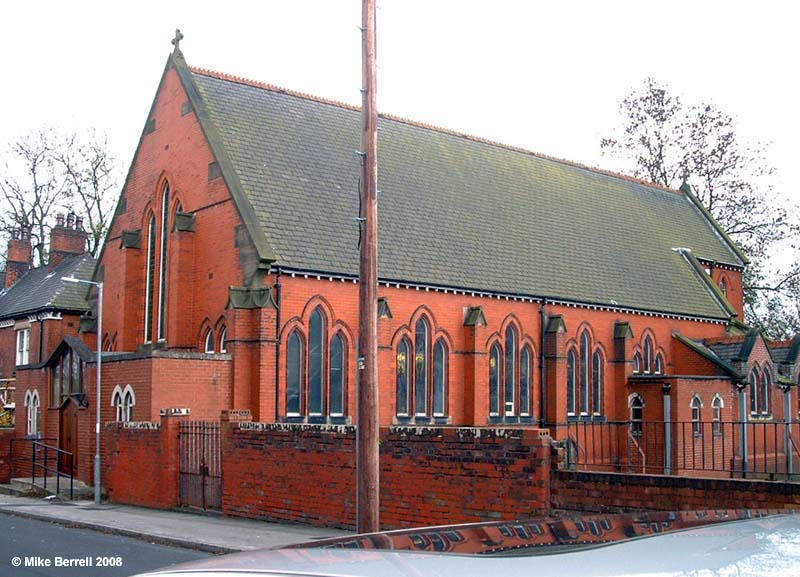 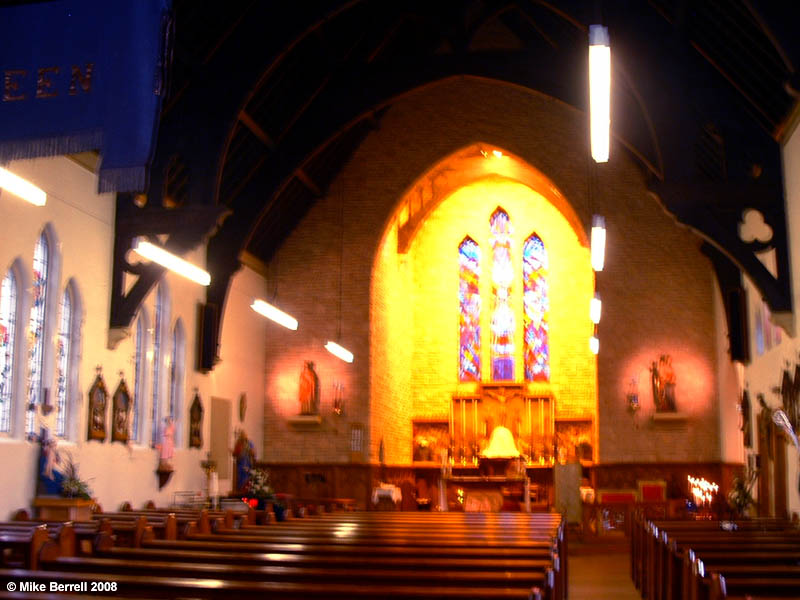 This Church, which is situate near the Park, Sharples, was consecrated and dedicated July 22, 1877, by the present Archbishop of Westminster. Prior to its erection by the Late Father W. Taylor, Catholics resident in Egerton, Halliwell, and Astley Bridge, were obliged to come all the way to St. Marie's, Little Bolton, if they desired to be present at Holy Mass, on Sundays or Holy Days. This difficulty as time wore on and the population rapidly increased became decidedly pressing, the services at St. Marie's were greatly overcrowded, in fact for some years one-half the congregation attending this church would have sufficed to fill it. Eventually by the untiring exertions of the priest, nobly assisted by the people of the Mother Church St. Marie's (which parish at that time extended to the farthest points of Halliwell and Egerton, and included Astley Bridge) increased church and school accommodation was provided at Astley Bridge. The building, which was erected by Mr. Leach, contractor, is 67 feet long by 32 feet wide, and is of plain solid design. In the lower storey is a covered playground, which has lights open to the south, and is 60 feet long, 30 feet wide, and 10 feet high, the floor above being supported by cast iron pillars. Above this is the school-room, 60 feet long, 30 feet wide, and 15 feet high, and capable of accommodating 300 children. Above the school is the chapel, which is 66 feet long, and 30 feet wide, and affords accommodation to 300 worshippers. The lighting of the chapel is by means of a "lantern" which extends the whole length of the building, with the exception of the two extreme bays. The light obtained by means of this lantern ia a modulated one, the direct ray usual in ordinary cases giving place to one more subdued and effective. More recently a substantial presbytery has been added. Just now, if one may judge from a hurried visit, the whole block, church, schools, and presbytery, are in sore need of repair, and a thorough overhauling at the hands of painter and decorator, and just to complete the work a boundary wall, if for nothing more necessary than privacy and protection, is palpably wanted. The present rector is Father John Darby, his immediate predecessors being the late Father P. M. O'Reilly, and Father Pious De Witte.

This mission was at first a chapel-of-ease to St. Mary's, Bolton, when Fr. Taylor first opened the chapel in 1877. The mission became separate in 1880, and the first resident priest was Fr. Maximilian Jüttner, one of the German priests recruited by Bishop Vaughan. Apart from the five years served here by Fr. P. M. O'Reilly, all the work of building up the mission was done by priests from abroad. A Dutch priest, Fr. Pius de Witte, was appointed here in 1885 and remained for three years. He worked for some fifty years in Salford diocese and then retired to Germany, where he died in 1929. Much devoted work for the mission was done by a Belgian priest, Fr. A. M. Vantomme, who was here from 1894 to 1915. He built the new church, which was opened in 1902. A convert from the south of England, Fr. Douglas Evershed, followed Fr. Vantomme. In more recent years the parish has been cared for by Fr. Joseph O'Shaughnessy and by Fr. N. Barre.