HEATON (LITTLE), a township in Prestwich parish, Lancashire; contiguous to Great Heaton, 5 miles N of Manchester. It was called, till about a century ago, Heaton-Fallowfield. Acres, 509. Real property, £1,915. Pop., 838. Houses, 161. The manor belonged to the Hollands, and passed to the Egertons. About one half of the property belongs now to the Earl of Wilton. A farm house, called Old Hall, occupies the site of Old Heaton Hall. There is a national school.

Details about the census records, and indexes for Little Heaton.

The Register Office covering the Little Heaton area is Manchester.

You can see pictures of Little Heaton which are provided by:

"LITTLE HEATON, a township in the parish of Prestwich, hundred of Salford, county Lancaster, 5 miles N. of Manchester. It formerly belonged to the Hollands of Denton, from whom it passed to the Egertons. The village is considerable, many of the inhabitants being engaged in the bleach-works, The principal residence is Heaton Hall, a seat of the Earl of Wilton.

In 1835 Little Heaton was a township in the parish of Prestwich.

You can see the administrative areas in which Little Heaton has been placed at times in the past. Select one to see a link to a map of that particular area. 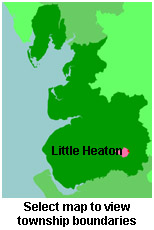 View maps of Little Heaton and places within its boundaries.